Ex Libris: The newsletter of the American Library in Paris

The American Library in Paris’s print newsletter, Ex Libris, began as a literary review published in the mid-1920s, during the first years of the Library’s existence. The publication was dormant from 1926 until the mid-1980s, when it was revived as ALP Notes by then-Director, Paul McAdam, as a seasonal recap and review of Library news and events. That format continued until 2020. Today, Library news is published in e-Libris, our bi-weekly email newsletter. Anyone may sign up to receive e-Libris.

In 1923, the American Library in Paris was already subscribed to twenty newspapers and 118 periodicals. These included major English-language news, lifestyle, and cultural publications, and, by the end of the decade, locally-published “little magazines” such as The Transatlantic Review and transition. Added to this list, in the summer of 1923, was Ex Libris, “an illustrated monthly review” edited by Library Director William Dawson Johnston and managed by Library Trustee Lewis D. Crenshaw. The striking cover design was created by American artist Robert Ryland Kearfott, who was studying painting in Europe at the time.

The introduction to the first issue of Ex Libris stated as its primary purpose “to make American and English books better known on the European continent”, and each of the twenty-two issues contained articles of French-American interest, book reviews, lists of new arrivals in the Library’s collection, and advertisements placed by local businesses. Among the contributors were Comtesse Clara Longworth de Chambrun, a Shakespeare scholar and the trustee-turned-acting director at the Library’s helm during the latter years of the Occupation. Book reviewers included Gertrude Stein on Troubadour [An American Autobiography], by Alfred Kreymborg (vol.2 no. 9, June 1925), and both Stein and Ernest Hemingway on Sherwood Anderson’s memoir, A Story Teller’s Story (vol.2 no. 6, March 1925). In fact, Hemingway’s glowing review was long-forgotten, and was only “rediscovered” by scholars in 1969. Also of note is a short tribute to Hemingway penned by Stein, entitled “He and They, Hemingway: A Portrait” (vol.1 no. 6, December 1923).

At the time, entrance to the Library’s periodical reading room was free to the public, and it’s easy to imagine that Library regulars included Ex Libris’s contributors, subscribers, advertisers, and readers. In his 1934 debut novel Burmese Days, author George Orwell sends his character Elizabeth to the American Library’s original location:

[Elizabeth] had one great solace at this time. It was to go to the American library in the rue de l’Elysée and look at the illustrated papers. Sometimes on a Sunday or her free afternoon she would sit there for hours at the big shiny table, dreaming, over the Sketch, the Tattler, the Graphic, the Sporting and Dramatic.

To learn more about the original Ex Libris, and to see a full index of articles and contributors, members may read the following articles in the Library: 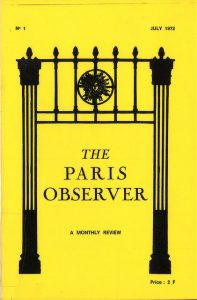 The Paris Observer was a short-lived magazine published by the American Library in Paris, and edited by author and journalist Alice-Leone Moats. The stated purpose of this English-language magazine was to give American residents and tourists insight into Paris’s cultural heritage. Just six monthly issues were published, from June to December 1972. These six issues are not yet available digitally.

All issues of Ex Libris are the intellectual property of the American Library in Paris and the copyright for individual articles rests with the authors for the legal duration stipulated by French copyright law. Ex Libris may not be reproduced for profit. Please credit the American Library in Paris when citing in whole or in part. Ex Libris is protected by a Creative Commons Attribution NonCommercial NoDerivatives 4.0 license (CC BY-NC-ND 4.0). The American Library thanks the University of Michigan, the University of California, and the HathiTrust for scanning and providing digital copies of the 1923-1925 issues.