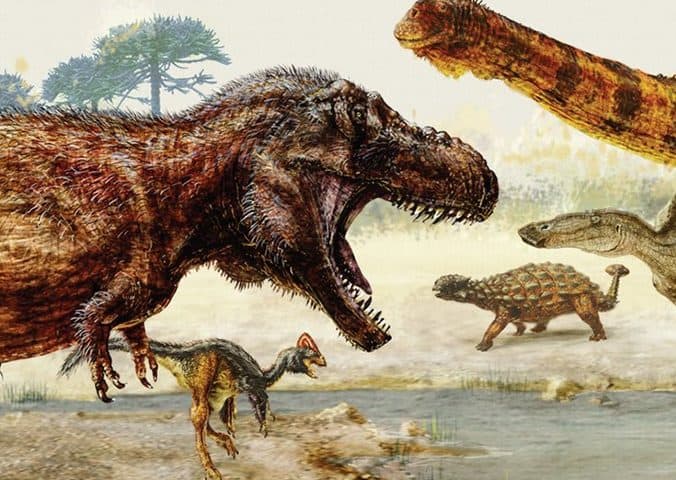 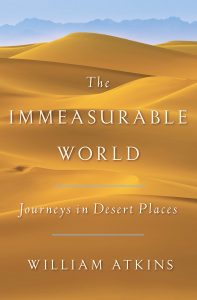 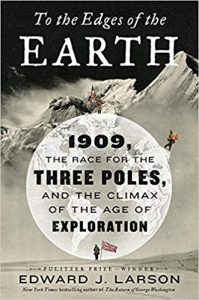 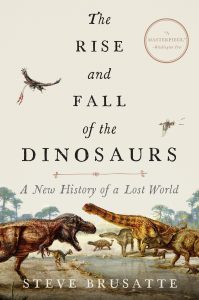 Library volunteer Olga Ospina is a true bibliophile, reading more books in a week than most do in a month. She will be regularly contributing to the Library blogs with her recommended readings, including this one on her favorite travel books.

Some of the last hybrid books on travel and history include the recount of a modern expedition to Alaska, the description of three expeditions to the “three” poles that took place in 1909, the narration of eight journeys to deserts and stretching a little the idea of time travel into the past, and a book about dinosaurs.

Tip of the Iceberg: My 3,000 Mile Journey Around Wild Alaska, the Last Great American Frontier, by Mark Adams

The author, a seasoned adventure travel writer, set out to retrace the expedition organized by railroad magnate Edward H. Harriman in 1899 to survey the coast of Alaska. In this adventure of 3,000 miles the author travels north through Wrangell, Juneau, and Glacier Bay, then continues west into the regions of Aleutians and the Arctic circle.

Whereas Harriman converted a steamship into a floating university inhabited by some of America’s best scientists and writers – John Muir among them – the author travels north armed with Dramamine and a mosquito net, hopping ferries from town to town, taking the airplane when needed and talking to experts and people from every walk of life. The author alternates the expedition’s history with his own adventures, describing contemporary Alaska within its historical framework. He details the natural beauty as well as the changes that have taken place. He also introduces the state’s economy through its three rushes: the fur traders, the gold rush and the Alaska pipeline.

This book is highly entertaining, agreeable, informative, and sometimes funny. After finishing it I wanted to read everything Mark Adams has written.

The Immeasurable World, Journeys in Desert Places, by William Atkins

A third of the earth’s land surface is a desert and this book introduces us to 8 deserts in 4 continents from a political, spiritual and geographical point of view. The author’s travels took him from China’s Taklamakan desert to Oman’s Empty Quarter, passing through Australia, Egypt, Kazakhstan and the United States. While visiting a Cistercian monastery, the author discovered a link between the earliest Christian monks and the world’s deserts. The first one, Saint Anthony, removed himself from the lives of loved ones, then travelling further into the desert until he reached the South Galala mountains becoming a model for those wishing to renounce society. By the 19th and beginning of the 20th centuries, the desert was a place to be discovered and the author retraces the journeys carried out by the explorers T. E. Lawrence, Bertram Thomas and Wilfrid Thesiger who traveled through the Empty Quarter.

The book explores the shrinking of the Aral Sea after decades of failed irrigation policies for producing cotton, resulting in an environmental catastrophe.  The author visits the Cave of the Thousand Buddhas and Egyptian monasteries. He also chronicles the Burning Man ceremony held at the end of summer in the Nevada desert and he spends time with No More Death workers, who leave water bottles, clean socks and tinned food for undocumented migrants crossing the Mexican border into the Sonoran Desert. But the desert can also be a place of violence: these remote places allows liberties, and one of these is the liberty to commit outrages. One case developed is when in the 18th century China banished criminals and political dissidents to the Gobi and Taklamakan deserts. Another case is the story of Moralinga, a corner of Australia’s Great Victoria Desert used by the United Kingdom as a testing ground for nuclear weapons carried out in the 1950s and the consequences on the Aboriginal people.

This is a travel and nature book that also touches history, geography, art, literature, religion and politics. The prose is beautiful, and the author alternates the natural history of these places with his personal experiences.

To the Edges of the Earth: 1909, the Race for the Three Poles, and the Climax of the Age of Exploration, by Edward J. Larson

In 1909 parts of the world remained unclaimed and the author, a Pulitzer-prize winning historian, recounts the adventures of three main explorers who raced simultaneously to the North and South Poles, and the so-called “Third pole” located in the Himalaya, achieving something that was thought to be impossible.

The three expeditions were led by the American Robert Peary who wanted to reach the North pole, the British Ernest Shackleton who wanted to reach the South pole (before his well-known adventures with the Endurance) and the Italian Duke of the Abruzzi who wanted to climb the highest mountain. The American Pearcy, obsessed with glory, wanted to surpass the record held by the Duke of Abruzzi. He led several prior expeditions to the North Pole, losing toes in the trial. We learn some unsavory details about his removal of religious objects from the Inuit Nation, how he downplayed scientific records, and how after much controversy it was accepted that he was the first explorer to reach the North pole first.

The successful and very difficult expedition to the South pole had two groups which relied on ponies, dogs and a useless car, one led by Shackleton headed to the geographic pole, and another led by a highly qualified scientific group which headed to the magnetic pole. The Duke of the Abruzzi wanted to conquer the highest mountains. The Mount Everest being inaccessible since Nepal and Tibet closed their borders, the Duke accomplished the first expedition to the Himalayas’s Eastern Karakorum.

I loved the way the author weaves these three stories overlapping in the same year, his writing is fluid and he richly details the bravery, the successes and also the failures and flaws of these men who were running after fame and glory. Our glimpse into the spirit of adventure and scientific inquiry of these expedition rely on the author’s study of the archives and his own voyages.

The Rise and Fall of the Dinosaurs: The Untold Story of a Lost World, by Steve Brusatte

This book invites us to travel into the past. The author of this book is a leading fossil expert, a young paleontologist specialized in evolutionary biology who has done field work in many countries and has already discovered 15 species of vertebrate fossil. The first thing I learned is that we are living through the golden age of paleontology and that a new species of dinosaurs is being found on average once a week. No wonder this author has many things to tell.

This book charts the origins of dinosaurs, their flourishing, diversity and extinction. Dinosaurs ruled the earth for 150 million years and disappeared of the surface of the earth 66 million years ago (Homo Sapiens have existed for 200,000 years). The asteroid that crashed into the Yucatan peninsula in Mexico being the main reason for their extinction. The author introduces us to the evolution on the field of paleontology. Technology is leading to new discoveries: CAT scans that let access information hidden inside the bones helping scientists to understand how dinosaurs behaved; animation software to study how dinosaurs moved, how fast they could run, how hard they could bite; and science coding which permits building complex family trees. The book explains how feathers are the primary evidence that birds evolved from dinosaurs. There are thousands of fossils of dinosaurs covered in feathers, found on dinosaurs buried very quickly so that they didn’t have the time to decompose.

This is a gripping book, highly readable, entertaining and informative. There are many books about dinosaurs for children but not that many books for adults and here we are introduced to the latest theories on dinosaurs and how they rose to dominate the planet.