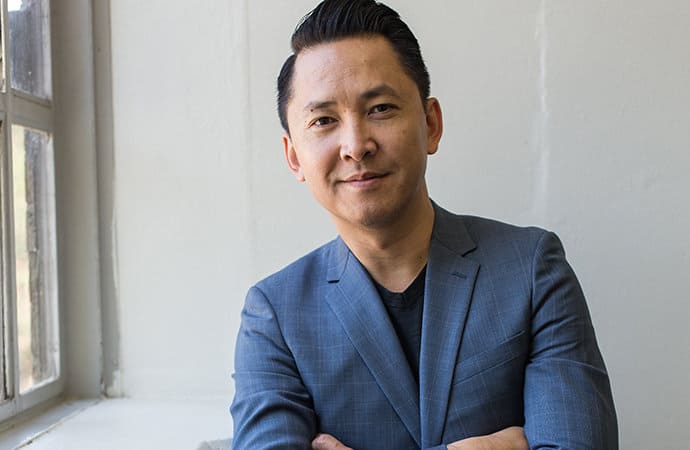 On Wednesday 4 July, the American Library in Paris will welcome Viet Thanh Nguyen to talk about his edited collection of essays The Displaced: Refugee Writers on Refugee Lives. Nguyen won the 2016 Pulitzer Prize for Fiction for his novel The Sympathizer. He is also the Library’s first Writer-in-Residence for summer 2018.

The collection of essays brings together writers from all over the world, including Mexico, Bosnia, Iran, Afghanistan, Soviet Ukraine, Hungary, Chile, Ethiopia, and many more places. These essays tell their stories as refugees and offer us a glimpse at what it is like to be forced out of your home. You can read more about the contributing authors for The Displaced (including Joseph Azam, David Bezmozgis, Fatima Bhutto, Thi Bui, and many others) here.

In preparation for next week’s event, here are some essential reads by Nguyen, in both short and long form.

Nguyen constructs a collection of stories about those who have traveled between two worlds and left one country for another. Written over a period of 20 years, these stories tackle questions of cultural differences, aging, and family, as well as the dreams and difficulties associated with being an immigrant. Purchase the book from Grove Atlantic here, or check it out from the library.

Viet Thanh Nguyen on being a refugee, an American — and a human being

In this piece, written for Financial Times, Nguyen speaks about his own experience as a refugee and how it informs his identity as an American. “In the United States, land of the fabled American dream, it is un-American to be a refugee,” Nguyen states in this article. “The refugee embodies fear, failure, and flight. Americans of all kinds believe that it is impossible for an American to become a refugee, although it is possible for refugees to become Americans and in that way be elevated one step closer to heaven.”

“Call Me A Refugee, Not an Immigrant”: Viet Thanh Nguyen

Written even more recently for The Nation, in this interview with John Wiener, Nguyen explains why he insists on being called a refugee rather than an immigrant. He also talks about his dislike of the term ‘genius,’ and explains how literature can be deceiving: “Literature’s strength is built on empathy, both the empathy of authors and the empathy of readers who want to get to know other characters, other people from different places. This is a very powerful thing, but it’s also deceptive because it’s a luxury. We want to know about terrible situation X and sympathetic person Y, and when we’ve read their story, our hearts are warmed and our emotions are moved. But what happens if we don’t do anything?”

On using excel spreadsheets for reading

We wrote about some of Nguyen’s favorite books here, many of which can be checked out from the library. Even more recently, Nguyen told the Boston Globe that he uses excel spreadsheets to make sure that he is reading books from a diverse set of perspectives. The writer also said that he recently enjoyed reading Neapolitan quartet by Elena Ferrante, A Knight in Shining of Armor by Jude Deveraux, and The Best We Could Do by Thi Bui, one of the contributing authors for The Displaced.

Last (but certainly not least), you can check out Nguyen’s Pulitzer Prize Winning debut novel The Sympathizer here in the Library, or purchase it via Grove Atlantic. Part spy novel, part love story, part political drama, this book tells the story of a double agent and army captain whose loyalty to the Communist cause in Vietnam conflicts with his loyalties to those around him. In this gripping read, Nguyen contributes a crucial and fresh perspective to the narratives surrounding the Vietnam War, and allows the reader to explore and question what it means to move between two worlds.