A note about public health and safety 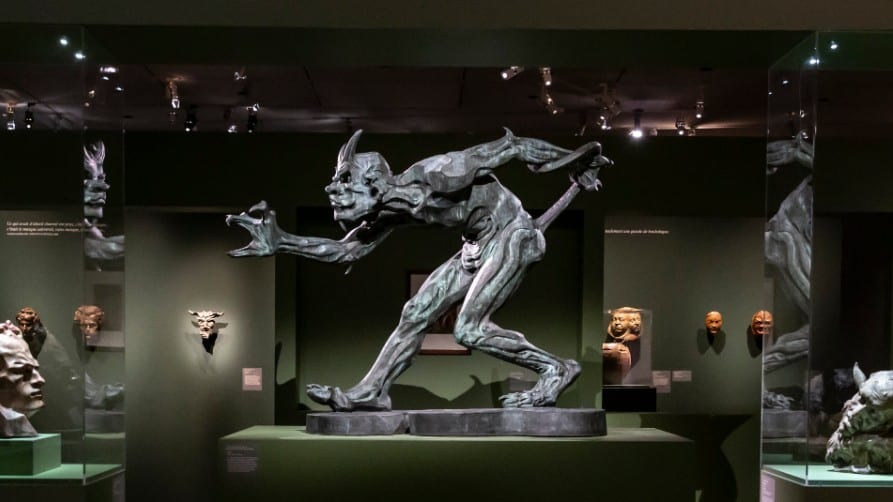 This month, Library volunteer Mike Duffy visited the Musée Bourdelle for a dive into the dark, swirling 19th century psyche of sculptor and ceramicist Niels Hansen Jacobsen. Visit the Members’ Lounge for Mike’s companion book display, with selections inspired by the exhibition. All displayed books may be checked out.

Guest blogger Mike Duffy lives in Paris following his retirement from a career in university teaching and management. He spent his first 30 years in Pennsylvania (born in Pittsburgh, he attended college and graduate school in Philadelphia), then spent a bit more than that in California where he taught accounting and finance at the Universities of California (Berkeley), Southern California and San Francisco. He can now be found in art museums, historic sites, and concert halls throughout the city.

The Strange Tales of Niels Hansen Jacobsen, A Dane in Paris

Europe in the late 19th century embraced many great contrasts: light frivolity versus solid bourgeois values; romantic, idealized visions of women versus demonized depictions of dangerous femmes fatales; dreamy days versus nightmarish nights; premonitions of a deep, ordered universal set of principles versus a sinister sense of depravity lurking inside everyone. The Strange Tales of Nils Hansen Jacobsen, A Dane in Paris, at the Musée Bourdelle, emphasizes the darker side of these contrasts through a very interesting exhibition of pottery and sculpture. The artworks date from Jacobsen’s 1892-1902 stay in Paris and are featured alongside many pieces by his contemporaries, called Symbolists, who were interested in otherworldly, dreamy, non-realistic, and inward-looking approaches to art.

Four amazing sculptures by Jacobsen capture the awful tension, the frightening fiction of Hans Christian Andersen’s fairy tales and Nordic legends. The Little Mermaid is pretty and gentle, a sad figure with downcast eyes from a story about longing, getting what you want—sort of— and having what you really want taken away. Other works present the dark side of the Symbolist world: disturbing dreams, uncertain anxieties, violent death. The bronze A Troll Smelling Christian Flesh (1896) is categorized by the curators as “Savagery of the Psychic Forest”: What a description! What could be locked in the human “psychic forest” that becomes this dynamic folkloric creature with horns, claws, and tail, menacing and malevolent? In Shadow, there is the feeling of being followed, inevitably being overtaken by something as vague as your own shadow, while Death and the Mother offers no solace as death rushes away with the child a mother chooses not to save in the face of a 50/50 chance that the child’s life will be one of misery and misfortune. These pieces recognize, perhaps even celebrate, typical 19th century themes: unfulfilled longing, primitive impulses, and lurking dangers.

The grip of the dark side of humanity and nature comes through not only in Jacobsen’s subject matter but in the choices he made in presenting these figures. The graceful curves, soft tone, and stillness of The Little Mermaid depict a melancholy 19th century female figure. Troll, Shadow, and Death and the Mother, on the other hand, move from the Mermaid’s dreamy sadness to full-on fear, desperation, and despair, with sharp angles and bent, nearly prone, rushing figures. Created ten years before the birth of Cubism, Troll is a great set of angled planes à la Cézanne, but it also unmistakably captures movement, as will the work of Italian Futurists two decades later. Force and fear propelling flight is reflected in the disfigured face and the dramatic flowing lines of Shadow, whose planed figure flies parallel to the ground. And look at Death, whose thin, muscled legs thrust his body forward, out of reach of the grieving mother. These sculptures can be viewed from all sides, which lets us appreciate Jacobsen’s skill and style while also letting us dwell on the macabre.

Another important element in the artistic milieu of Paris during Jacobsen’s decade-long stay was the continuing strong influence of Japanese crafts, reflected in his pottery as well as in his interest in masks. The Japanese influence encouraged artists to throw off the official, sanctioned artistic dictates of the Academy and to celebrate the imperfections found in daily life. This is especially seen in the display of many ceramic pieces created by Jacobsen. The vessels, cups, and pots are misshapen, bent and curved in organic, vegetal shapes with various colors dripping down their sides. The Japanese aesthetic embraced such less-than-perfect pieces as they emerged from the baking process, taking the results of chance as examples of a strange beauty. Jacobsen spent much of his life experimenting with the process of creating ceramics, trying, by design, to capture what was produced by accident in Japanese pieces. (As is typical of Musée Bourdelle, there are good displays and a video which explain how ceramics are made, adding an interesting element to the exhibition.) In addition, several ceramic pieces highlight the appearance of animals, in the Japanese tradition, as well as in 19th century stories. Don’t miss the bat hovering over an inkwell, an item that would be at home on the desk of Count Dracula or Bruce Wayne, as well as the lizard pot which should be viewed from all sides to fully appreciate Jacobsen’s marvelous design.

Well-displayed masks and busts made by Jacobsen, Antoine Bourdelle, and anonymous Japanese artisans add another, valuable dimension to the exhibition. The masks, ranging from realistic to fantastic, depict sea monsters, trolls, and Medusas and illustrate the imagination and talent of these artists with wonderful textures, colors, and techniques. The angular, menacing Mask of Autumn is particularly notable; it is inventive, simultaneously ancient and modern, fusing elements of Japanese and Nordic cultures with its open mouth ready to bite, devour, or howl. The realistic busts or masks of Jacobsen and his wife, along with those by Bourdelle — a great, moving Beethoven, and a soldier’s pained expression in Suffrance — showcase the depth of traditional skill that these artisans built on when they moved to less traditional subjects and styles.

The late 19th century’s contrasting or contradictory philosophies are also displayed through works of Jacobsen’s contemporaries. No works of Alfons Mucha, the late 19th century’s best-known Parisian portrayer of young, beautiful women with broad smiles and flowing hair amidst Art Nouveau arabesques, appears in this exhibition. Instead, the darker side of the late century (male) artists’ view of women comes to the fore. These figures are Mucha-gone-mad, or gone-bad. Dangerous women — Medusa, who could turn you to stone if you as much as looked at her, and Salomé, who demanded the head of John the Baptist. Frightening or frightened women occupy the Symbolist nightmare-end of the spectrum of dreams including works by Jens Lund and Edvard Munch. One exception is an ethereal blue and purple Birth of Venus by Odilon Redon (which is actually from a decade after Jacobsen left Paris).

The themes and stories portrayed are very much 19th century, while the styles and techniques look forward to the 20th . Those familiar with Emily Brontê’s Wuthering Heights (1847), Fyodor Dostoevsky’s Crime and Punishment (1867) or Sigmund Freud’s Interpretation of Dreams (1899) will recognize that Jacobsen and his fellow plastic artists also understood the existence of a subconscious reality. Those familiar with Cubism, Surrealism, and abstraction will see that these artists were also moving the art world toward the modern. This is an exhibition rich in small treasures, with a few eye-opening large sculptures, and reflective of a time when the old was being thrown off and the search for the new was underway.