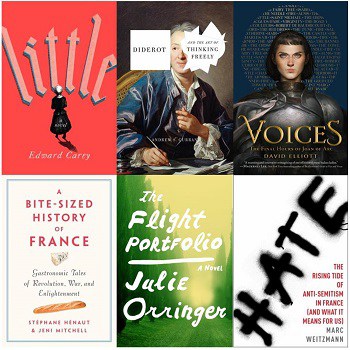 Six titles have been selected as finalists for the 2019 American Library in Paris Book Award: a novel set in Occupied France, a culinary primer on French history, an intellectual biography of Diderot, a poetic reimagining of the life of Joan of Arc, a polemic on anti-Semitism in France, and a fictional account of Mme. Tussaud’s early years.

The shortlisted books are:

A Bite-Sized History of France: Gastronomic Tales of Revolution, War, and Enlightenment. By Stéphane Hénaut and Jeni Mitchell. The New Press.

Diderot and the Art of Thinking Freely. By Andrew S. Curran. Other Press.

The Flight Portfolio: A Novel. By Julie Orringer. Alfred A. Knopf.

Hate: The Rising Tide of Anti-Semitism in France (and What it Means for Us).  By Marc Weitzmann. Houghton Mifflin Harcourt.

The Library’s annual Book Award recognizes the most distinguished book of the year, written and published in English, about France or the French. Eighty-two titles were submitted for consideration by authors, publishers, and others across the English-speaking world. All the submissions for the 2019 Book Award are in the Library’s circulating collection, available for checkout by members.

As always during the seven years of the prize, the winning title will be selected by an independent jury. The jury this year consists of Alice Kaplan, professor of French at Yale, whose latest book is Looking for the Stranger: Albert Camus and the Life of a Literary Classic; Pamela Druckerman, New York Times contributing columnist and author, most recently, of There Are No Grown-Ups: A Midlife Coming-of-Age Story; and Thomas Chatterton Williams, author of the forthcoming Self-Portrait in Black and White: Unlearning Race and a writer for the New York Times Magazine.

The winning title will be announced, and the $5,000 prize presented to the author, at a ceremony in Paris on Thursday 7 November 2019. All Library donors are invited to the event. The Book Award is supported by generous funding from the Florence Gould Foundation.