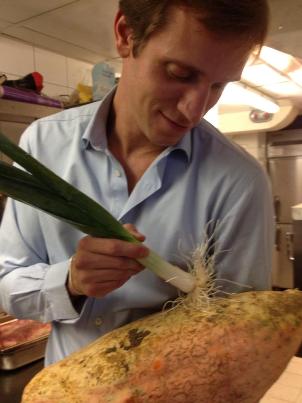 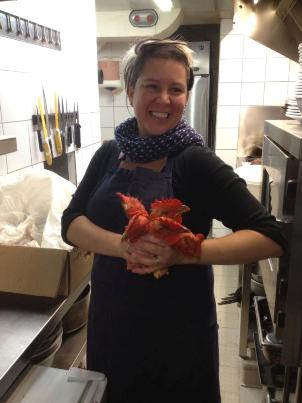 With Thanksgiving just around the corner, we imagine that many of the Library’s American members and guests are finalizing their plans for the all-important meal of of the year. As Elaine Sciolino recently wrote in The New York Times, it seems that every American in Paris has a Thanksgiving story, and this day of the year is a hard one to give up, even if celebrated abroad.

One of the Library’s Local Business Partners, Café de Mars, is celebrating Thanksgiving for the second year with a traditional dinner menu on Thursday 28 November. The Library recently interviewed the owner of the Café, Pierre Marfaing and chef Gina Mclintock, who comes from California, about their Thanksgiving story, what this holiday means to Americans and French, and what they’ll be serving.

Pierre: One of my father’s best friends has an American mother, and since I was a kid, we’ve been invited to Thanksgiving lunch. As it is celebrated quite early. So I’ve been going to Thanksgiving since I was young and it became part of my November schedule. It was usually on a Sunday, so it was not officially the day of Thanksgiving. She wanted to invite all of her family and friends on a Sunday, and we would be a group of 30 or 40 people at her house in Paris. She celebrated in a very traditional way; she would cook all the traditional things for the meal. I didn’t really know it was Thanksgiving until I was 11 or 12 years old. Then I started to understand what all the celebrating was all about, and why we were always eating the same stuff year after year! Before that I was wondering, “why are we are here and who is this weird woman?” But she was my introduction to Thanksgiving, this wonderful person named Lynn. My American Thanksgiving introducer!

I’m actually still not very familiar with the original story of Thanksgiving. I know we’re supposed to give thanks to everybody for whatever you had during the year, and whatever you’re going to have later in the next year. And I realize that it’s even more important than Christmas in terms of family reunion. I kind of saw that in New York, which is a very cosmopolitan city, when I was there. People would come from all over the state and everywhere in the world to work in New York. I observed how everyone would leave town during Thanksgiving to visit family and it was not the same for Christmas. People would continue working and celebrate Christmas with friends or just their own families.

But I’m still not quite sure about what Thanksgiving is. I have some friends who distribute meals during Thanksgiving. I have a good notion as a restaurant owner in Paris of what I should serve for food for Thanksgiving, and how it should be prepared and served. But I don’t know the whole history of this celebration.

Thanksgiving is really one special time, one special evening, that we’re celebrating at the Café since I’m very close to American culture because I lived there, but also because I enjoy it, too. I hired a lovely American chef Gina, and she and I decided to do the first Thanksgiving dinner at the Café de Mars in 2012. Last year there were lots of American people during the first service, then French during the second service. We guess that this year will be the same, but we’re doing three services, so maybe we’ll have some Spanish people at the last part of the evening!

Last year’s dinner was a lovely time. A lot of turkey was made to meet all the demand! It was really nice to have this evening served family style in these big dishes. People didn’t have to choose anything because the menu was set and everyone was eating the same thing, just like you would in your own home. And so the people would come together and sit with other people they didn’t know. It was fun.

American expats would come to Café de Mars for Thanksgiving dinner and sit next to other Americans and they probably had some communications and exchanges during the evening. I have some American neighbors who have made their reservations for Thanksgiving, and I know that it’s important for them to celebrate this, even when they are away from their country. And I understand this because in France, we have a very traditional meal for Christmas with a stuffed poultry as well, with fois gras and la bûche. Of course in different regions of France, you’ll have very local and specific desserts and treats for Christmas. I think it’s kind of the same for Thanksgiving where you have strong memories of a specific meal all together with your family. And I don’t think you have the same kind of experience for Christmas in the States.

Gina: Both of my grandparents were farmers, so it was a matter of deciding which side of the family we were going to celebrate with. One was out by the central valley and we would pick the berries off the vine and make the cobbler. The other side were poultry farmers so it was perfect!

We’re doing a classic menu, with a few twists and turns, but it’s essentially a classic menu. We know people want something familiar, they want the stuffing, the turkey, the mashed potatoes.

Pierre: And it’s important to have the right good-quality produce and good recipes. Well, there is a little zest of creativity in the marshmallow cream with sweet potato soup, and a bit of something different in the stuffing that we’re doing. So that should be good!

Café de Mars is located at 11, rue Augereau, 75007, Paris. Reservations for their Thanksgiving dinner can be made by calling 01 45 50 10 90. Check out the menu here. Library members receive one free glass of house wine – chosen by the Café staff – to accompany a meal both for that dinner or any other meal, so be sure to show your Library card when you dine at the Café de Mars!