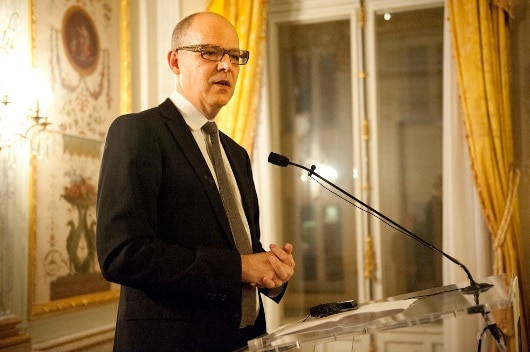 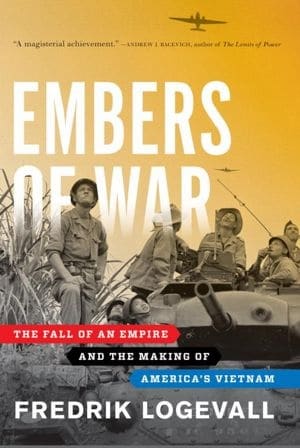 Following are excerpts from remarks by Fredrik Logevall upon receiving the 2013 American Library in Paris Book Award for Embers of War: The Fall of an Empire and the Making of America’s Vietnam on 15 November 2013 at the George C. Marshall Center in Paris.

At the core the book concerns what is arguably the most important question of America’s post-1945 history: why did we end up in Vietnam? Why did the United States, borne out of an anti-colonial reaction against Britain, opt to back France in a colonial war against Ho Chi Minh’s revolutionary nationalist forces, and then, once France was defeated, choose to try to succeed where the French had failed?

I reached a deeply troubling conclusion in the course of my research. The three presidents most closely associated with the war—Kennedy, Johnson, and Nixon—escalated and perpetuated a war that they privately doubted was either winnable or necessary. They sent 58,000 Americans to die for a cause they did not believe in.

To understand why they did, so we need to go back to the period before heavy US involvement, to the period of the French Indochina War, or First Vietnam War. And by doing so, we find to what an extraordinary degree the Americans later followed in the footsteps of the French. As the great student of Vietnam, Bernard Fall, once put it, Americans were “dreaming different dreams than the French but walking in the same footsteps.”

To study these wars in succession is to experience feelings of déjà vu: The soldierly complaints about the difficulty of telling friend from foe, and about the poor fighting spirit among “our” as compared to “their” indigenous troops; the gripes by commanders about timorous and meddling politicians back home; the solemn warnings against disengagement, as this would dishonor the soldiers who had already fallen (the “sunk-cost fallacy,” social psychologists would call it); the stubborn insistence that “premature” negotiations should be avoided—all these refrains, ubiquitous in 1966 and 1967 could be heard also in 1948 and 1949.

And always, there were the promises of imminent success, of corners about to be turned. When U.S. Commanding General William Westmoreland in late 1967 exulted that “we have reached an important point when the end begins to come into view,” he was repeating a prediction made by French commander Henri Navarre a decade and a half earlier, in May 1953.

Civilian leaders, meanwhile, in Paris as much as in Washington, boxed themselves in with their constant public affirmations of the conflict’s importance and of the certainty of ultimate success. To order a halt and reverse course would be to call into question their own and their country’s judgment and to threaten their careers, their reputations.

Far better in the short term – always the term that matters most to the ambitious politician – to forge ahead and hope for the best, to ignore the warning signs and the contrary intelligence and diplomatic reports. With each passing year after 1949, the struggle for senior French policy makers became less about the future of Indochina, less about grand geopolitical concerns, and more about domestic political strategizing, careerism, and satiating powerful interest groups at home. The main objective now was to avoid embarrassment and hang on, to muddle through, to avoid outright defeat, at least until the next vote of confidence or the next election.

Somehow, American leaders for a long time convinced themselves that the remarkable similarities between the French experience and their own were not really there. What mattered, they maintained, was that the French were a decadent people trying vainly to prop up a colonial empire, their army a hidebound, intellectually bankrupt enterprise.

Americans, on the other hand, were the good guys, militarily invincible, who selflessly had come to help the Vietnamese in their hour of need and would then go home. Untainted by colonialism, possessor of the mightiest arsenal the world had ever seen, the United States was the champion of freedom, the engine in the global drive to stamp out rapacious Communist expansion.

It was, for the most part, self-delusion. And what U.S. officials for a long time didn’t fathom, and then refused to acknowledge after they did, was that colonialism is often in the eyes of the beholder: To a great many Vietnamese after 1954, the United States was just another big white Western power, as responsible as the French for the suffering of the first war and now there to impose its will on them, to tell them how to conduct their affairs, with guns at the ready.

The other side, led by the venerable “Uncle Ho,” had opposed the Japanese and driven out the French and thereby secured a nationalist legitimacy that was, in a fundamental way, fixed for all time—whatever their later governing misdeeds. They, much more than the succession of governments in South Vietnam, were the heirs of an anticolonial revolution.

The American Library in Paris Book Award is given to the best book of the year in English about France or the French-American encounter. For more information on the Book Award, please see here.