Susan Ossman: On writing about expatriates 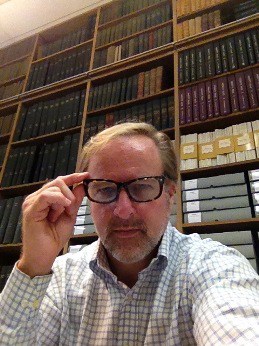 Reflections of a Visiting Fellow

In a world where so much research can be done by Google, where the online connections are so vast and facts seemingly immediately confirmed, there is still no substitute for being there.

For me the reminder of this enduring truth came by way of a fellowship at the American Library in Paris. The research for my forthcoming narrative biography of Le Corbusier, the father of modern architecture, had progressed in significant ways, across the Atlantic – at the Special Collections library at Harvard’s Graduate School of Design, and in interviews and research in the extensive archives. I had also traveled to Ronchamp and Marseilles, Chandigarh and Roquebrune-Cap-Martin.

Yet my three-week sojourn in Paris produced still more tangible benefits, many in unexpected and unplanned ways.

A friend of the Library, Virginie Alvine-Perrette, had put me in contact with Monique Valery, the niece of Pierre Savoye, who commissioned the icon of the International Style at the hilltop in Poissy. Madame Valery not only agreed to an interview but invited me to lunch at her home. Over port, I drank in the books and pictures lining the built-in bookshelves in her salon on rue Madame, prompting me to ask questions I otherwise might not have thought of.

I walked through the Marais, the neighborhood Le Corbusier had targeted for demolition for his 1925 Plan Voisin. Being at Place des Vosges, which he would have preserved, gave me at least some small understanding of this footnote to what is otherwise considered the ultimate audacity, razing the heart of Paris. Similarly, at the Musée d’Orsay, a gallery showing the history of the restoration of the old train station that it once was, and the overall effect of the stunning museum, once again put my subject in context. Surely Le Corbusier would have appreciated the place, though he submitted plans for a modernist complex on the site, slated in the early 1960s for demolition. 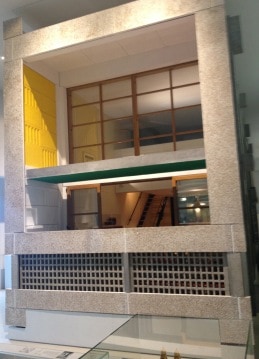 The Cité de l’Architecture et Patrimoine had the good timing to open an exhibit on Art Deco while I was there, including extensive coverage of the 1925 Exposition of Industrial and Modern Decorative Arts, where Le Corbusier had his L’Esprit Nouveau pavilion and debuted the Plan Voisin. Also at the museum was a recreation of an apartment from Unité d’Habitation in Marseille. I waited to enter while students filed through, checking out the compact kitchen and bedrooms accessed by a simple set of stairs.

Throughout, the Library had a multiplier effect, as I picked up tips and met people and ventured down new pathways. The audience at my October 1 presentation further confirmed how much Le Corbusier is detested as much as revered. I gratefully accepted an invitation to dinner afterwards at Les Clos des Gourmet around the corner, hosted by Clydette de Groot, the Library board member who first conceived, with director Charles Trueheart, of the concept of an researcher in residence. Seated across from me was Patricia Trocmé, partner of John Morris, who had made a presentation some weeks before. Madame Trocmé, it turns out, had met Le Corbusier in India, and dined with him and his wife, Yvonne, who she remembered as offering cigarettes all around seemingly every two minutes.

Another fellow Library presenter, Jerry Fielder, furnished observations made by Yousuf Karsh while making Le Corbusier’s portrait, at his penthouse residence at 24 rue Nungesser et Coli in the 16th arondissement. I was aware of the Karsh sitting, but discussing it and gaining new appreciation for the Armenian-Canadian photographer, from the lecture, book, and exhibit that happily opened during my stay at the Mona Bismarck American Center across the Seine, prodded me to add the detail in a later chapter of my book. My subject was surely delighted to be in the company of Churchill and JFK and Hemingway as iconic figures of the 20th century.

The physical presence worked its magic in other ways. The streets and the stacks intertwined.

Reenacting Le Corbusier’s walk to work in the 1920s, from 20 rue Jacob to the atelier at 35 rue de Sèvres, I had many questions, about Les Deux Magots, the Hotel Lutetia and Le Bon Marché, the opening date of the Metro stop at Sèvres-Babylone, and what place rue Renne had in the pantheon of Haussmann boulevards. Charles Trueheart and Grant Rosenberg produced the books that contained the answers, from a history of the Paris Metro to an accounting of Hemingway’s favored bistros (the writer and the architect frequented the same destinations in Saint Germain, though I have been unable to confirm if they were ever imbibing at the same time and place). An added bonus was reading Paris Reborn, by Stephane Kirkland, yet another Library presenter and a finalist in the Library book prize.

My best brush with serendipity occurred late in my stay. A Library member researching a book on occupied Paris couldn’t make my talk, but followed up days afterwards with an invitation to Restaurant Joséphine Chez Dumonet – the spot in 1943 where Le Corbusier, at the tail end of his engagement with the Vichy regime, met with Arno Breker, Hitler’s favorite sculptor. The place seemed not much changed over the intervening 70 years, right down to the pigeon and the soufflé on the menu. We were seated by the front door, and who walks by but Robert Caro, the Pulitzer Prize-winning author of series on Lyndon Johnson and The Power Broker, the latter of particular relevance for me given my last book, Wrestling with Moses, on the battles between Jane Jacobs and Robert Moses in New York. There we were, at the threshold of Café Josephine, trading tales of how Robert Moses had been so deeply influenced by Le Corbusier, from housing towers in the park to his infamous elevated urban freeways.

After his 1935 visit to America, Le Corbusier sketched himself, stepping across the Atlantic, one foot in the promising metropolis in New York, the other at Paris by the Eiffel Tower. That journey and subsequent visits, most notably his participation in the design of the United Nations complex on the East River, culminated in a complicated relationship with the U.S. But nothing at all would have happened had he only seen the city in photographs, as a young man in La Chaux-de-Fonds.

As much as I rely on the Internet, I’m a big fan of going places. As a reporter for The Boston Globe, I learned that there was a lot that could be accomplished on the telephone, on deadline, but that there was always something to be gained just by showing up at an event, bumping into people, observing things, or having unplanned conversations.

A visiting fellowship at the American Library in Paris was an extraordinary opportunity, prima facie. It was made even more so by all these experiences, many of which I could not have planned. So while I cannot possibly express my gratitude sufficiently to the American Library in Paris, the board and staff, to the de Groots and the de Groot Foundation, I can say that it worked. I’m confident that future visiting fellows will have similar unscripted revelations. Who knows what might await. My advice to them would be as follows: just go.