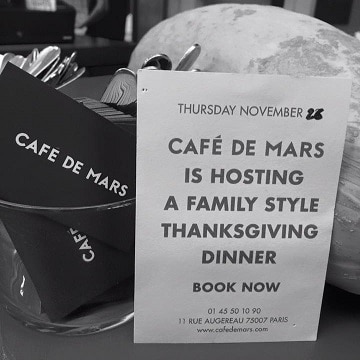 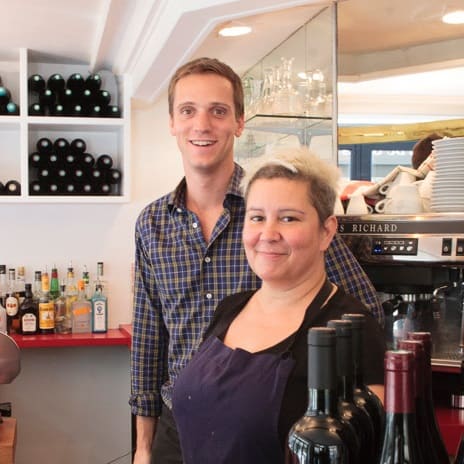 For Americans living in Paris, it’s hard to tell that Thanksgiving is coming up real soon. There aren’t any big turkeys (yet) at the butcher and we don’t get a long holiday weekend. Still, we imagine that many of the Library’s American members and guests are finalizing their plans for the all-important meal of the year. Thanksgiving is an enduring American tradition that stays with us no matter where we happen to be in the world. And with the recent events in Paris, many of us are grateful to have any reason to get together with loved ones over good food.

One of the Library’s long-time partners, Café de Mars, is celebrating Thanksgiving for the fifth year with a traditional family-style dinner menu on Thursday 26 November. The Library recently talked with chef Gina Mclintock, who comes from California, about what’s she’s cooking up for Thanksgiving at the Café de Mars. Here’s an excerpt from that interview:

Every year we talk about doing new things. I talked about rubbing the turkeys down with some miso butter, slide that under the skin for an interesting new flavor. But the more we talk about, we think since this is a new tradition for the French and our American families are away from home and they want something that they remember, that we decided to stay pretty traditional. You might get a few twists and turns, but generally it’s your turkey, stuffing mashed potatoes and pumpkin pie.

When I was in Glasgow for Thanksgiving one year, I rubbed the turkey down with peanut butter, which was really fantastic. I just don’t think that I’d be able to do that here.

I start off with the foods that are indigenous to the United States, the Americas, I supposed you can say. I start with a list, and then from that list I write out an idea of what is traditionally served at Thanksgiving. I think about what my grandparents used to serve, what friends would do back in the States. Then I try to find ingredients here. If I’m going to do a soup, I’ll try to make it with foods from that list.

A problem we seem to have every year is cranberries, which are hard to find. You can get them frozen, but they’re very expensive. I have an issue with flying something over from the States just so we can have them for the season. Gooseberries are a good substitute, it’s close enough. For the French, cranberries are the tart red thing that they ignore anyway!

My cooking has many influences. I’m from Northern California, so for me my American influences are Hispanic, Indian, Asian, Hawaiian. I lived in a little cul de sac, and my neighbors were German, Peruvian, African, Mexican. That was just on my little street. All of this has influenced my cooking and for me that is America. I don’t have a problem mixing and mashing when I cook. Why not make a chipotle stuffing? But as I speak with other Americans, especially those from the Midwest, they don’t have that same outlook or experience. So for Thanksgiving, we try to go middle of road and straight-forward, concentrate on the ingredients rather than the technique. Still very good and delicious of course!

I always end up making what I imagine Thanksgiving to be. However, there was one year that I wanted to make homemade cranberry jam and shape it like a tin can. Just like it was served at my grandmother’s home! But the owner of the Café, Pierre, just didn’t understand that, and he was not going to get a mold in the shape of a tin can.

So the Thanksgiving menu at Café de Mars this year will start off with a soup. I had a vision of a corn and beet ravioli in a corn broth with pumpkin seed oil. Then a salad of rubbed kale, sweet potato and hazelnuts. Everything comes family style, so there’ll be platters. The platters will come with turkey, gravy, mashed potatoes, stuffing, and my mother’s green bean casserole. We’re going to do a fresh fruit salad with the cranberries and some pears, oranges in a cranberry vinaigrette. Then there’s pumpkin and apple pie, with chantilly cream. We get our pumpkin pies from Rachel’s, she’s an American in town who owns a bakery and she makes the best in town. And we’ll serve clementines and salted chocolates with coffee.

One thing to note is that all the sides will be vegetarian, except for the turkey and gravy.

It’s going to be a relaxed evening, a nice time with family and friends. The first seating will be at 7:30pm and will go through 8:30pm, then the second seating will start at about 9pm until about 11pm. And for people who can’t come on the day of Thanksgiving for this meal, the Cafe will have a plat on Friday, the day after, that will have everything that was on our Thanksgiving menu.

Café de Mars is located at 11, rue Augereau, 75007, Paris. Reservations for their Thanksgiving dinner can be made by calling 01 45 50 10 90. Library members receive one free glass of house wine – chosen by the Café staff – to accompany their Thanksgiving meal and any other time for lunch, so be sure to show your Library card when you dine at the Café de Mars!