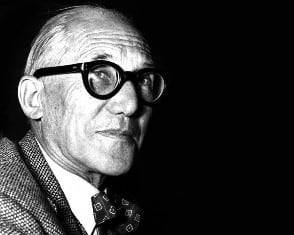 Le Corbusier is widely recognized in Europe as one of the founding fathers of 20th century modern architecture. In France his legacy is honored not only by the Fondation Le Corbusier in the 16th arrondissement, but at Villa Savoye in Poissy, Nortre Dame du Haut du Ronchamp, the recently restored Couvent Sainte-Marie de La Tourette and the architect’s prized cabanon in Roquebrune-Cap-Martin, which is set to become part of a modernist compound at the Cote d’Azur alongside the rehabilitated Villa E.1027 nearby.

For every fan, though, it seems, there is a critic — perhaps especially in Paris, where his Plan Voisin (an iteration of his original City for Three Million People or Ville Contemporaine) would have demolished nearly two square miles of the 3rd and 4th arondissements, except for important architecture such as the Place des Vosges and the Palais Royal. Later schemes for Paris were similarly shunned, right up until his death in 1965.

In the U.S., it is a different story. Most are unlikely to have any idea who Le Corbusier was; another, homegrown modern master, Frank Lloyd Wright, is more widely known, and appreciated; his Fallingwater takes in visitors in annual numbers that rival a Disneyworld attraction.

There might be a flicker of recognition if Americans are shown the Villa Savoye on the cover of the box of a Lego kit. The recently concluded exhibition at the Museum of Modern Art in New York introduced, or re-introduced the Swiss-born architect, born Charles-Edouard Jeanneret to thousands of interested visitors.

Those more familiar with Le Corbusier in the U.S. tend to be those that truly rival him, holding him responsible for inhumane public housing towers in the park, for freeways through the heart of urban neighborhoods, windswept plazas, blank walls, and the hundreds of copycat concrete parking garages and office buildings in virtually every major American city’s downtown. The modern landscape is dismissed as “brutalism,” a slightly sideways coinage based, of course, on the material “beton brut,” but today associated with being ugly, overbearing, unwelcoming, and well, brutal.

The final piece of this puzzle is how Le Corbusier himself viewed the U.S. He had a complicated relationship with America, first arriving by ocean liner in 1937, and disappointed there were not crowds of photographers there to greet him. He traveled overseas in search of commissions and to sell his urban design schemes in cities like New York and Chicago. As part of that pitch, he felt he needed to proclaim American cities suffered from problems, which of course he then could fix. But although he was adored at the colleges he visited, his criticism was shrill, like a lover already expecting to be spurned. He was disappointed he did not get more credit for the design of the United Nations complex on the banks of the East River in Manhattan, and in the end built only one building in North America: the Carpenter Center for the Visual Arts on the campus of Harvard University.

In fact, Le Corbusier had a lot of admiration for the U.S. It was truly the frontier, in skyscrapers, burgeoning cities, and the provision of housing. And his influence is extensive, if not directly credited. Today the micro-housing or small-apartment initiatives undertaken in many cities comes straight out of the playbook of Le Corbusier’s Unite d’Habitation, in Marseille, Nantes-Reze, and Firminy.

Such is the nature of this particular French-American encounter — both bruised egos and respect, dismissal and impact.

Anthony Flint will present his book-in-progress, The Raven: The Life of Le Corbusier, Maker of the Modern at the Library on October 1st.