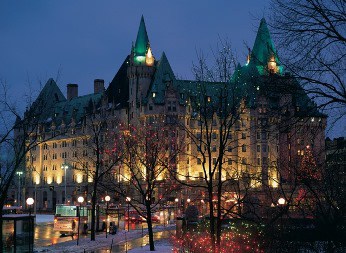 The Château Laurier Hotel, where the studio was on the 6th floor, and where the Karshes had their apartment.

On the day we closed the studio, we spent the day moving things out of the studio and into storage. We were dismantling things. The studio was in the Château Laurier Hotel in Ontario, so we had people from the hotel helping us out. In the evening, when we were finished, we locked the door around 4 or 5pm, for the last time. We went up to their apartment, which was also in the Château Laurier. There was Yousuf, his wife, me, Mary Alderman, his secretary of 20 some years, Ignas Gabalis, who was his printer for 40 some years, and our assistant Charles Britt – it was just us, and someone had given us a magnum of champagne, so we all had some champagne. It was all very festive, we were all sad to have it end, but also happy to have it done with the door locked and have all the work completed. 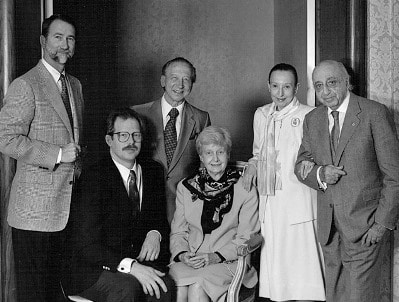 Yousuf was fine, for all of us it was a bit nostalgic, but he was in a really good mood and he was the type of person who moved on in life. He had a very difficult childhood, growing up during the Armenian massacres, and he was able to put that behind him and start a new life. He made alot of changes in his life – his first wife passed away, he married again very happily for 40 years. He just had a way of moving on and not dwelling in the past. He lived in the present and always look forward to the future.

Yousuf was 84 years old when he closed the studio. We had a number of exhibitions that we were going to be opening. We were working on a retrospective with the Museum of Fine Art in Boston. And one of the reasons why he closed the studio was that his wife Estrellita had said that at one point, there would be time for them, and they thought that time was now. So they did alot of things, they both enjoyed theatre and music and they traveled – we took some trips together. He had a quieter life, but he was always active, his mind was always active. He read a great deal, he listened to music, they saw friends and they did all the things that they never really had the time to do because his work was all-consuming.

For such a public person, he was in many ways a private man. He just didn’t suffer from artist angst, and I’ve met many artists in my life. I’ve never met anyone quite like Yousuf. He didn’t worry much about what he’d done, he didn’t worry about how good it was going to be, or whether people were going to like it or not like it. He knew what he had when he was photographing, and he knew when he had the photograph. And then he was done, he would relax, he was happy, and he knew the people would be happy about the image, and time to think about the next sitting.

He was a very modest man, he had none of his photographs in his own home, except for a small photograph of his wife on his dressing table that he took. He loved art and they had great art in his home, and he loved looking at other people’s art and he didn’t need to be looking his own art. He was definitely happy about his work, happy with what he did, but he was just really modest.

Jerry Fielder, Curator and Director of The Yousuf Karsh Estate will present photos by Karsh in conversation with Meredith Mullins at the Library on October 8th. The exhibit Yousuf Karsh: Portraits of Writers will be on display at the Library through December 8th.