Theasa Tuohy: A word on Vietnam 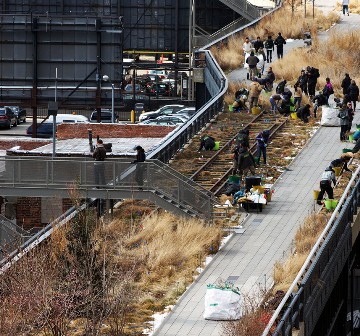 I’m headed to Paris this week to give a talk at the American Library about the High Line. As my plane takes off, an important rite of spring will be ending in New York’s “park in the sky”: the March Cutback. This makes it a perfect time to visit the High Line’s muse and inspiration, the Promenade Plantée, the world’s first mile-long garden built on an old railroad viaduct. Like the High Line, the park in Paris – also known as the Coulée Verte – floats 30’ above the busy streets, cutting through the entire 12th arrondissement.

For all their similarities, the two parks are quite different. Unlike the Promenade Plantée and most other formal gardens, the plants on the High Line are not clipped and pruned at the onset of Fall, when cold weather arrives. Instead, they are left alone to complete the full cycle of their lives. Piet Oudolf, the Dutch horticulturist who created the High Line’s garden design, believes that plants should be interesting and beautiful to behold throughout all the stages of their growth. As he once told a reporter, “Dying in an interesting way is just as important as living.”

For the High Line, Oudolf chose plants that recall the beautiful and richly diverse wild garden that grew on the abandoned viaduct after the trains stopped running in 1980. He selected some 250 species of perennials, grasses, shrubs, vines and trees, both native and exotic, that would change in striking ways throughout the year, delighting and engaging a visitor no matter what the season.

I expect to arrive in Paris with a few blisters and even some dirt beneath my fingernails. Every year, throughout the month of March, Friends of the High Line – the group that saved, built and now runs the park – enlists an army of volunteers who work elbow-to-elbow alongside the gardening staff to cut back around 100,000 plants in preparation for the new growing season. The volunteers approach the job like good postal service employees: in rain, snow, sleet, and hail (I once even worked through a thunderstorm) we clip, cut, rake, and haul, filling enormous canvas bags with cuttings that will be trucked to Staten Island where they will rest in peace in giant piles, before becoming mulch for another garden.

The founders of Friends of the High Line, Robert Hammond and Joshua David, knew the Promenade Plantée well, and greatly admired it. But they had a very different idea for the park they would create in New York. At its heart, the High Line was intended to recall the old railroad, horticulturally as well as architecturally. Not only is it filled with a great many plants that are natural pioneers along abandoned railroads and other industrial ruins, but the train tracks themselves got a starring role: they were embedded in the pedestrian pathway and garden beds, where they enunciate the gentle curves that engineers of the New York Central once line navigated back in the day when the railroad was king. Crushed stones were placed in garden beds to suggest railroad ballast, and throughout the park a visitor encounters old signal lights, loading docks, meat hooks, and other elements once integral to the railroad’s freight operation.

Paul Van Meter, a horticulturist, railroad historian, and co-founder of VIADUCTgreene in Philadelphia, notes that the stylish, highly ornamental garden types on the Promenade Plantée – its lush, bamboo forest, sheared hedges, arcades of roses, allé of trees – are by contrast “representative of French classicism, with a focus on decoration rather than function.” He also points out that the elevated garden in New York “signals an important change in American tastes which inclines toward the heavy use of perennials and wildflowers. It’s no coincidence that Robert Hammond grew up in San Antonio, Texas, not far from the Lady Bird Johnson Wildflower Center, whose 1999 grand opening in part led Americans to discover the inherent beauty of wildflowers and grasses so they would invite them into their gardens.”

As they came to “re-see the beauty of ‘native’ wildflowers,” Van Meter explains, “the post-World War II designers, like my great friend and mentor Wolfgang Oehme and more recently, of course, Piet Oudolf, gained (re)appreciation for a certain kind of controlled wildness. With that notice came availability of plants in previously unprecedented variety and sizes. And a revolution was on.”

So: two gardens made from old railroads, each a reflection of its history and culture. For me, the great delight of these places is that they form one long, linear, observation deck, providing a stunning and original perch from which to view a much-loved city. In the 1850s, Frederick Law Olmsted and Calvert Vaux conceived their first creation, Central Park, as a grand escape  from the city: a place where anyone, no matter how rich or poor, could rejoice in fresh air and beautiful scenery. Today, parks like the Promenade Plantée and the High Line do just the opposite: they console, inspire, and delight us by taking us deeper into the city, through a tunnel of roses (as in Paris) or a prairie of wild grasses (as in New York).

These gardens have had a powerfully transformative effect on the way we think about nature, urbanism, and culture. Just as the Promenade Plantée inspired the High Line, so is the High Line serving as a model for other innovative projects around the world. In London and on Manhattan’s Lower East Side planners contemplate underground parks that deploy 21st century lighting systems and could support agricultural projects like a mushroom farm. Philadelphians dream of a park in two sections that embrace the full range of an urban railroad’s historic pathway: an elevated garden bathed in natural light and a submerged series of graffiti-adorned tunnels. Work continues on the Beltline in Atlanta, a project that is so big – it runs for 22 miles – it can connect as many as 45 different communities.

Virtually every city in the world has a railroading past, and rather than bury or tear down that history, urban planners and community leaders are today seeking to identify the cultural heartbeat of their project, and bring it life as a great public space and grand connector.

The Cutback in New York and the rosebuds in Paris remind us of such renewal, and give cause for much celebration and joy.

Annik La Farge is the author of On the High Line: Exploring America’s Most Original Urban Park  (Thames & Hudson, 2012). She will be giving an illustrated talk at the American Library – with more than 100 contemporary and historic photographs – on April 2. To read more about the High Line other urban greenway projects around the world, visit Annik’s blog, LivinTheHighLine.com.