Visiting fellow Jacqueline Woodson, on her inspiration – A Moment, Please 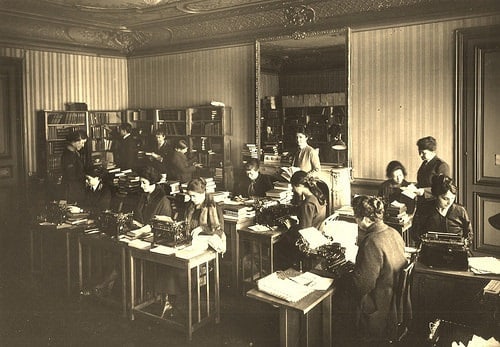 As an American living in France, I take it for granted that my local French public library is set up just like my childhood library back in upstate New York. Books on open shelves, arranged by Dewey Decimal call number; a catalog searchable by author, title, and subject; a reading room with adequate light and comfortable seating; long hours; and generous borrowing privileges all seem perfectly normal to me. What I didn’t know was that many of the features I recognize in Paris are American imports from the post-WWI era. In fact, before I was invited to participate in a round table discussion at the recent Salon International du Livre Rare at the Grand Palais, I didn’t know how instrumental American librarians were in rebuilding and modernizing French public libraries between the wars. Alongside Mathilde Schneider of the Musée franco-américain du Château de Blérancourt and Viviane Ezratty of the Heure Joyeuse library archival collection, we explored the topic, “Lire à l’heure l’américaine, influences transatlantiques dans les bibliothèques françaises.”

Before the American Library Association’s international committee turned its attention to its Library War Service, it had the idea of establishing a model American public library in Europe. There were forward-looking French librarians intrigued by these new world modernisations, but their efforts to spread these controversial ideas were cut short by the war. After the Armistice, American money and volunteer efforts went towards rebuilding devastated regions, and providing free public libraries to locals was key. Anne Morgan, founder of CARD (comitié américain pour les régions dévastées) and based at Blérancourt, was instrumental in providing American librarians like Jesse Carson of the New York Public Library with the resources to furnish and staff French libraries in the Aisne region in the north of France, and in the Belleville quarter of Paris. Among the most surprising elements of these new libraries were their children’s sections, with age-appropriate books and magazines, properly-sized tables and chairs, and regular story hours.

The popularity of these newfangled libraries led the American Library Association and CARD to establish the Paris Library School in 1923 to train French (and international) librarians in these revolutionary methods. This school was housed in the same building as the American Library in Paris, at 10 rue de l’Elysee. American Library staff members were also lecturers, and students used the Library as a hands-on classroom. A member of the conservative French establishment referred to the school as the “archivists’ school of the Far West” which was probably not intended as a compliment. One hundred graduates, mostly women, brought their skills and energy back to their home libraries in France and around the globe before the school closed in 1929. Among the graduates were Marguerite Gruny and Mathilde Leriche, two of the first three founding librarians at the Heure Joyeuse children’s library, offered to the city of Paris by the (American) Book Committee on Children’s Libraries in 1924. Central to their mission, as at the American Library in Paris in 1920, was global peace and understanding through exposure to ideas and culture found in books. Then and now, atrum post bellum, ex libris lux.

Want to learn more? Library members can access the following articles on JSTOR, be sure to Log In to your account before clicking on the links below:

Witt, Steven. “Merchants of Light: The Paris Library School, Internationalism, and the Globalization of a Profession.” The Library Quarterly: Information, Community, Policy, vol. 83, no. 2, 2013, pp. 131–151.