The building blocks to handwriting success 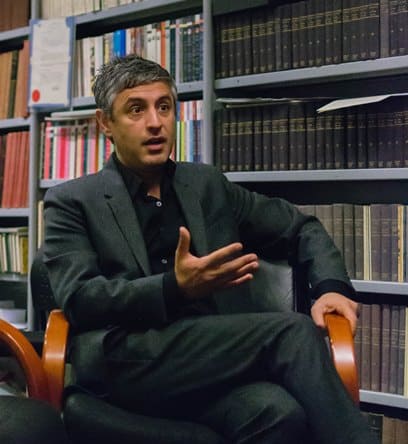 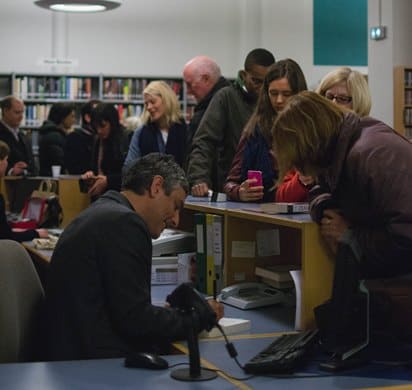 Reza Aslan was interviewed by Library staff members Grant Rosenberg and Pauline Lemasson before his talk. What follows are excerpts of his remarks.

What is your take on Laïcité and the concept of secularism in France?

Laïcité isn’t the separation of church and state. Laïcité is the forceful removal of religion in everyday life. That is something quite different from what the US has in terms of separate of church and state, which in and of itself is not what people might think, because certainly there is no separation between religion and public life in the United State. Quite the contrary, we actually promote religion in public life, encourage religion in public life. What we mean by the separate of church and state is that no citizen will be forced to pay taxes to a church that they don’t actually believe in. Which of course is different from the UK which sees itself as far more secular than the U.S., correctly so. And yet forces every citizen to pay taxes to a church whether they believe in it or not. Which reminds us how sticky this whole thing is about religion and society can be in practice.

But to me, the worst handling of that tension is the way France does it. Well actually the worst way of handling it is the way Iran does it, the opposite end of the spectrum, where religion is forced upon society, or forced upon the public realm, instead of encouraged. I think the French model is really not a model that can sustain itself in the 21st century. It’s predicated on this notion that assimilation means the stripping of one’s self, of one’s distinctive identity markers, be it their ethnicity or their religion, or for that matter their culture. And the acceptance of a identity formulated by the state. And that kind of notion may be could work in the 20th century, but there is simply no way that that idea can function successfully in the age of globalization, in the age of mass migration. I think part of the difficulty that France has been having in “absorbing minority cultures” has to do with what I call, coming from a non-French person, an antiquted ideology and is doomed to fail.

It’s funny because it’s not as though America is any less racist or intolerant or xenophobic than France is, because we are. But we have a system in place, a machinery if you will, that continues to chug on and absorb every wave of immigrants as they come into our shores. And as it does so, it transforms America itself in a way that is uncomfortable  to a lot of Americans, but in a way it’s unstoppable. There’s not much that could be done about it. I think that’s the difference, that our xenophobia gets inundated by this larger conception of what it means to be American. Whereas French xenophobia tends to clash with this inevitable globalized process of society of the European Union with the result of sometimes quite destructive circumstances.

It’s the attempt to an ascribed identity that all citizens must adopt, and that kind of top down identity formation has, I would argue, never worked. It certainly a failed and doomed process in the 21st century. It creates these bizarre contradictions. The whole hijab thing is such a crack-up to me. Sarkozy and his argument that if you are wearing a hijab, it’s impossible that was a personal choice, that obviously you were forced to wear it by your father or your husband, so therefore the state will force you to take it off. As though that is the expression of secular feminism or secular democracy. And the funniest thing about it is that you’re talking about barely 1000 people.

Why aren’t the ideas you explore in your book about the historical Jesus more a part of our everyday discourse about religion?

Because academia is a private club that you have to pay a certain due in order to be allowed in. And if anyone in that private club dares to sort of share our secret handshake with anyone else, the criticism is intense. Students always ask me how can I write for a more popular audience or for a more general readership. And I always say, get tenure first. Because it is the death nail of an academic career. It’s so funny to me that a person will go into the study of religion, the new testament, the historical Jesus, whatever, I assume because they find it fascinating and interesting. And yet they fail to realize that other people will find it interesting if they would just figure out a way to communicate these thoughts to a general public.

What I’ve written about we’ve known for centuries. The one thing that I hear is how come I’ve never heard of James. To me, part of the frustration that I have with my colleagues, and its why I teach a creative writing class because I just don’t want to be around them all the time. But I still want to be in the university and this allows me to do both. Which is often why other scholars of religion are often my biggest critics because they think I’m “dumbing down” by which they mean putting this information in an accessible and appealing manner. If anyone’s read my notes section, they know that if you’re interested in this kind of stuff, you can go and find the original source material and you can disagree or agree with me. But I also realize that 99% of my readers are not interested in that.

The answer to the question, why don’t we know this stuff, why isn’t this a part of the everyday conversation about Christianity or the early origins of the Jesus movement. It’s our fault that we don’t know this stuff or don’t talk about it. That was my biggest complaint of the whole Fox News thing was that everyone was so focused on the humor and craziness of it or the offensiveness of it. To me the thing that stood out was the inability of her to even consider religion as an academic discipline, that its something that scholars study. She couldn’t fathom it. And I would that this is true for majority of the people, certainly in the U.S., about the idea of religion as an academic discipline seems inconceivable. That’s not her fault, that’s our fault too.

Reza Aslan presented his latest book Zealot: The Life and Times of Jesus of Nazareth at the Library on Sunday 23 March 2014.