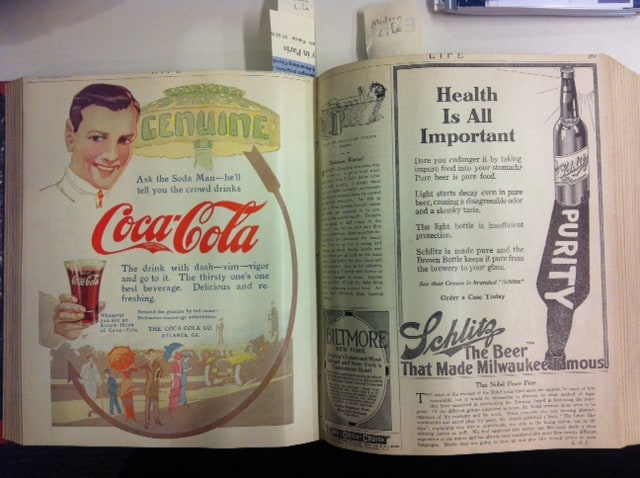 I enjoy history generally, but especially obscure history, the story of the underdog and the forgotten. So it was very exciting to volunteer for the Library on the exhibition America in 1914, now on display through 31 August. World War I was such a monumental event in modern history that it inevitably casts a long shadow over the rest of 1914 American life. Look up ‘America 1914’ in a research database, and references to American neutrality will dominate. We understandably tend to forget about all that went on in parallel to the Great War, and that major American history milestones occurred like the opening of the Panama Canal. So the research behind this exhibition helped remind me that for Americans, 1914 was about Ludlow as well as Sarajevo, about General Victoriano Huerta as well as Archduke Franz Ferdinand.

Visiting the United States 100 years ago is a strange experience, because everything feels at once familiar and yet backward. For example, the boxer Jack Johnson (known as the Galveston Giant) enjoys the celebrity status that we see today – he has fans around the world, he endorses products, he appears in movies, etc. Yet at the same time Johnson is constantly having to deal with the era’s racist Jim Crow laws. In Harper’s Weekly I read about general concern over declining theater audiences due to a new form of entertainment – the cinema. The author of the article optimistically predicts that theatergoers will be back… A century later, the handwringing is over the future of cinemas, which are shutting down as people watch movies at home, on their phones, etc. You can see in 1914 the roots of much of what we call American life today.

My favorite part of the research was looking through the Library’s fine collection of 1914 periodicals, notably Life and The New Republic (in its first year of publication in 1914). These titles gave me a window into the mentality of the American reader in 1914. Then as now, they seemed obsessed with their cars! It was also exciting to be working with original source materials from 100 years ago. I appreciated the opportunity to help the Library with the exhibition and working with their amazing team.

The exhibition America in 1914 is on view at the Library through Sunday 31 August 2014. Access to the exhibit is free to Library members, as well as users with a Library day or week pass. Visit the membership page for details.