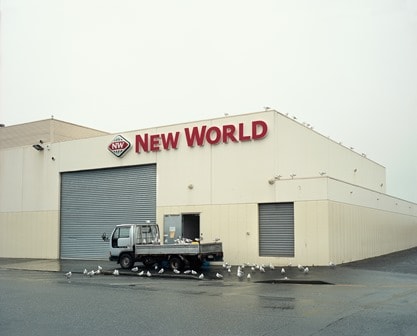 “It was the absolute silence, nature completely indifferent to the city, desert under the streets and the road, and, circling the streets, the desert just waiting for the death of the city to recover it with eternal sands. I was suddenly invested with a terrible understanding of men and their pathetic fate. The desert will always be there, white, patient, like an animal waiting for men to die, that civilizations go away and return to darkness.”

When did you first start taking photos? Do you remember what motivated you to start?

I’m a self-taught photographer, I don’t have any formal training in photography. I mainly learned on my own and from the different experiences that I had. I came to photography rather late – my first studies was in marketing and I worked in this domain for a bit of time. This field was not very interesting to me and I felt I couldn’t really grow in it so I had to ask myself what is it that I really want to do in life. This corresponded to a time, strangely, when I found the camera that belonged to my great-grandfather. It was an old camera made of wood that I moreorless put back together, and it was quite archaic, like an antique. From there, I found a desire to use it to express myself in a different way, to express ideas and critiques in a way that I couldn’t in marketing. The work I was doing then was very bureaucratic and I wasn’t growing in it and I was really looking for something, a path, to grow. Photography was a way for me to be independent and I always wanted to be my own boss. So I came to photography in this way. I had a friend who said a photographer was looking for an assistant, and like that I completely, and quite suddenly, changed my path.

Was your great-grandfather a photographer?

He wasn’t, but I think he would’ve wanted to be one. He did a lot of photography and as I came to photography rather late in my life, it was very moving to find his camera. I think he really wanted to do photography, but at the beginning of the 20th century, it was a bit difficult, complicated. And for me to go in this path, to do photography, is very meaningful to me since there was nothing that destined me to go in this direction. My father was also interested in photography, and he was taking lots of pictures in his youth. However, as he got older he followed a more normal path and didn’t pursue photography. I ended up to be the one who is doing what my great-grandfather and father perhaps would’ve have wanted to do.

Who/what has influenced you most in photography?

As I mentioned before, I started photography not by formal training in school, but by being an assistant to photographers. As an assistant to some famous photographers, it’s important to make note that I learned alot from these experiences, especially in technique in framing, lighting, etc. I also learned the human aspects – to better understand relationships and things over time, which I think is really important in order to evolve in this field. These experiences helped me to develop my “eye,” my perspective and a crtical vision in my work. There is the work of other photographers that inspire me, such as Stephen Shore and William Eggleston. So, American photography of the 1970s really influenced me. It helped to define my own photography and to better understand what it is that I wanted to do with it. I have to admit that photography was quite vague for me in the beginning, and all these experiences and other photographers’ work really helped to define and focus on my own vision. And this is mainly a photography project in color.

Have you ever done black and white photography?

This was a project that I wanted to do in color. I sincerely believe that, well, life is in color. That’s not a surprise, and it’s important for me to emphasize that I feel black and white photography can dramatize a certain scene, and in the end I wasn’t very interested in the outcome. Already there is a technique in light and shadow that is very hard to master. I just knew essentially that I wanted to work in color. All of my work is in color, and I have to be honest that they wouldn’t work in black and white!

In the exhibit New World, what drew you to New Zealand?

First off, I must say that I’m quite a fan of The Lord of the Rings and of course Peter Jackson is from New Zealand. Originally this trip to New Zealand was mostly destined to be a vacation. And a trip to New Zealand from here is not something that happens by accident. My companion and I had dreamed of visiting this country with such beautiful landscape and culture. It’s also on the other side of the world for us, so it has to be a trip that you want to make. We needed a change of scenery and we wanted to know what was on the far side of the world from us. And it was incredible. The photographic project “New World” was spontaneous, since I really didn’t know what I was going see there. I knew there was going to be incredible scenery, etc., but the idea was not to reproduce what had already been done. There are some very beautiful images of the landscape of New Zealand, and I didn’t want to reproduce that. The project really created itself from all the miles that we drove each day. There was a passage by John Fante in Ask the Dust that just came back to me as I was driving through this country. I had this impression that I was seeing what I had read. We did alot of driving, something like 4,000 km in a month.

Your photos in this project don’t have people in them, did you do you any portraits in New Zealand?

Initially I was hoping to do portraits, since it’s it’s essentially what I do in my work. But in the end, it’s true that one month is a short time. We didn’t have the time to really stop for a while, talk with the people, create relations, etc. So it was a bit difficult. I would really want to return one day and do more photography because I feel there are so many more photos that I want to do there. I actually did one portrait, of some lucky guy!

For your photos, did you choose a moment when there was nobody there?

Actually, when we arrived in the country and left the city, we didn’t really meet very many people at all. It’s a country that is not very densely populated. There were times that we visited a village that was on our map, and we discovered in getting there that this village really corresponded to 2 or 3 houses. Once you’ve passed them, you’ve passed the village. Each time we stopped, we realized that there weren’t many people out and about after 6pm – we didn’t meet very many tourists and not many locals. We would find ourselves in places that were deserted, or nearly deserted, with the exception of very touristic places. I would be in a village and I’d have my camera to take photos and I wouldn’t see anybody. It was a bit unsettling, this feeling of being alone. I wasn’t used to being alone so often, to not hear any sounds and to be surrounded by nature that was everywhere and really powerful, which just accentuated this feeling of being by yourself. The passage from John Fante came back to me very often. I was surrounded by this incredible nature and I felt that I some point, we could all be extinguished by it. It’s quite a feeling. My companion and I were very enchanted by the country and we shared the same feelings and desire to be there.

The New World exhibit by Jeremy Massa will be on view at the Library from 9 July to 15 September. His artist talk is on Monday 8 July at 19h30.