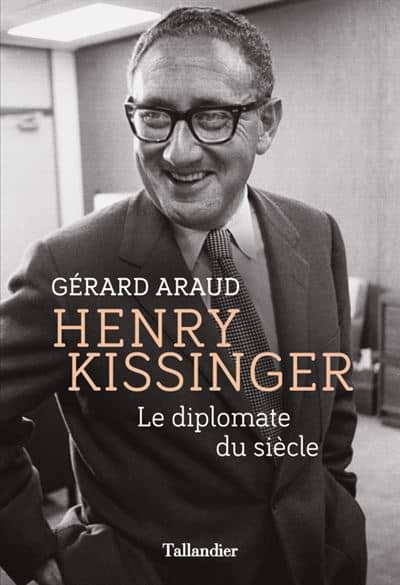 (Hybrid) Henry Kissinger: The Diplomat of the Century

Join Evenings with an Author (in-person) to discuss Henry Kissinger: The Diplomat of the Century with diplomat Gérard Araud and journalist Elaine Sciolino Click here to RSVP for […]

Join Evenings with an Author (in-person) to discuss

Henry Kissinger: The Diplomat of the Century

Henry Kissinger: Le diplomate du siècle (2021) is the story of a young Jewish boy born in Germany in 1923. The story begins as Kissinger, along with his family, fled from Nazism to New York. Equipped with luminous intelligence, an industrious ethic, and an overly playful character, Kissinger was able to navigate all situations from the streets of the Bronx to greens of Harvard University to the corridors of the White House. First National Security Advisor and then Secretary of State to President Nixon, Kissinger played a central role in world history. He was central, for example, to the end of the Vietnam War, the opening up of China in 1972, the détente with the USSR and the Yom Kippur War. He had many successes in the Middle East and Russia, but also setbacks in Chile and Cambodia. An outstanding negotiator, he was as much admired as he was detested.

Though Kissinger left office more than forty years ago, he still exerts influence as many great contemporary leaders – Putin, Xi Jinping, Modi, Macron – look to his legacy for guidance. With an insider’s gaze, Gérard Araud, a diplomat himself, retraces the trajectory of a man unloved by Americans, a man of spirit, and a man of Realpolitik who regulated global power to guarantee world peace.

Araud is a French diplomat, who served as Ambassador of France to the United States from 2014 to 2019. He previously held many positions within the Ministry of Foreign Affairs. Notably, he was Director for Strategic Affairs, Security and Disarmament, Ambassador of France to Israel, Director General for Political Affairs and Security, as well as Representative of France to the United Nations in New York. Over the course of his career, Araud has developed specialized knowledge in two key areas: Middle East and security issues. He was, for instance, the French negotiator on the Iranian nuclear issue from 2006 to 2009.

Since his retirement in 2019, he has served as trustee of the International Crisis Group and as Senior Distinguished Fellow of the Atlantic Council in Washington DC. He is a columnist for the French weekly Le Point, for the French TV channel BFM TV and for the National French Radio France Inter. He has frequently been interviewed as an expert on foreign affairs by CNN International, the BBC, as well as other English-language news outlets.

Sciolino is a contributing writer and former Paris bureau chief for The New York Times, based in France since 2002. Her latest book, The Seine: The River That Made Paris, was a Los Angeles Times bestseller and a Barnes & Noble nonfiction book-of-the-month selection. Her previous book, The Only Street in Paris: Life on the Rue des Martyrs, published in 2015, was a New York Times best seller. Sciolino was decorated chevalier of the Legion of Honor in 2010 for her “special contribution” to the friendship between France and the United States.

The conversation, a part of the Library’s Evenings with an Author series, is sponsored by GRoW @ Annenberg.

A pass sanitaire is required for all visitors ages 12+.

Visitors ages 6+, staff, and volunteers are required to wear masks on the premises.