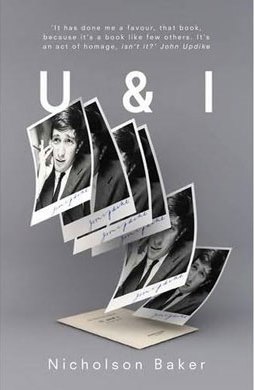 We are thankful for many things in our lives and as we work surrounded by books everyday, we are of course grateful for those books that meant something to us, either in the past or right now. Here are a handful of books that the Library staff are most thankful.

I’m thankful for the joy of rereading Nicholson Baker’s U and I, about his obsession with John Updike, which led me to Adam Begley’s sensitive new biography of the late author, Updike. In between I am squeezing in Garrison Keillor’s forgotten novel Liberty and Richard Ford’s cleverly-titled fourth book in the Frank Bascombe series, Let Me Be Frank With You, just out.
Charlie Trueheart, director

I am thankful for Don DeLillo’s 1997 novel Underworld. It’s not even my favorite book by this great author, but I read it at the time of its release, which coincided with the week I began my first full-time job in Chicago at the age of 23, a sorta-corporate position requiring a suit and tie. I had also just returned from six months abroad, and having had that brief distance from my own country for the first time, it was a moment when I was primed and ready to read a beautifully epic novel about post-war America – and Americans – in all its glory and shame. Underworld was my companion during those 45-minute lunches of those first few weeks, in that shift away from my years as a student and into the office workforce. It was just the tonic I needed.
Grant Rosenberg, programs manager

I will be forever grateful to the Calvin and Hobbes comic strips and the subsequent books that were published – my favorite being The Days are Just Packed with a picture of the two heroes lounging on a tree. I remember reading the comic strips as a kid and then re-reading them as an adult and it makes for a surreal mash-up of childhood and adulthood and excitment and nostalgia. Calvin and Hobbes were, and still are, the perfect combination of prankster and philosopher, throwing snowballs at an innocent girl’s head and later pondering the meaning of mortality. It’s perfection in every sense.
Pauline Lemasson, external relations manager

The Call of the Wild was one of my favorite childhood books about nature over civilization, the relationship between animals and humans, the cruelty of humans. I was 10 or 11 years old when I read the book. I’ve read all of Jack London’s short stories, he’s able to describe surroundings, about nature and man, and the struggles. You feel for his creatures, which are the characters. I especially like the last two sentences: “But he is not alone. When the long winter nights come on and the wolves follow their meat into the lower valleys, he  maybe be seen running at the head of the pack through the pale moonlight or glimmering borealis, leaping gigantic above his fellows, his great throat a-bellow as he sings a song of the younger world, which is the song of the pack.”
Natasha Mariet, circulation assistant 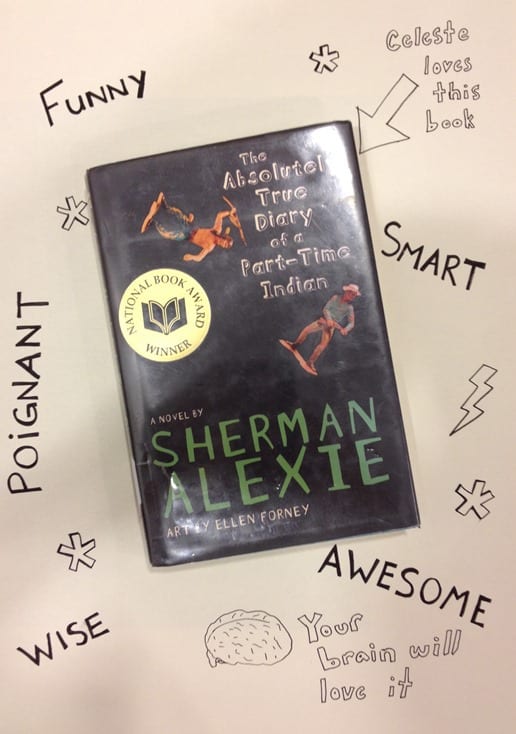 I’m thankful for The Absolutely True Story of a Part-Time Indian by Sherman Alexie. This was my “gateway drug” into Sherman Alexie’s writing. The book (which won the National Book Award in 2007) introduced me to Alexie’s writing, and I’ve been a big fan ever since.
Celeste Rhoads, children and young adult services’ manager