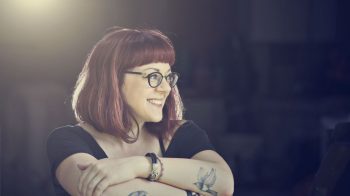 [This event has been cancelled, thank you for your understanding.]

Victoria “V.E.” Schwab is the #1 NYT, USA, and Indie bestselling author of more than a dozen books, including Vicious, the Shades of Magic series, and This Savage Song. Her work has received critical acclaim, been featured by EW and The New York Times, been translated into more than a dozen languages, and been optioned for TV and Film. The Independent calls her the “natural successor to Diana Wynne Jones” and touts her “enviable, almost Gaimanesque ability to switch between styles, genres, and tones.”

For her evening at the American Library, Victoria will be in conversation with Kirsty McCulloch Reid. Kirsty works here at the Library, assisting in the Children’s and Teens’ Services department with programs, the collection, and social media. She holds a Masters in Information and Library studies from Robert Gordon University.

No registration is required for this event, which is free and open to the public. Donations of 10 euros are welcome.

The interview will be followed by a book sale and signing, with books supplied by The Red Wheelbarrow Bookstore.