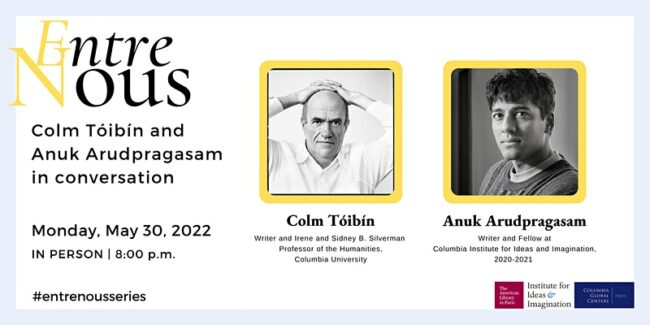 Join us at Reid Hall for an evening of readings and exchanges between Colm Tóibín and Anuk Arudpragasam. The Magician, Tóibín’s book on Thomas Mann, won the 2022 Rathbone Prize, and Arudpragasam’s latest novel, A Passage North, was shortlisted in 2022 for a Man Booker Prize.

The Red Wheelbarrow, an English-language bookstore in Paris, will be present at the event for book sales.

The Entre Nous series is co-organized by Columbia Global Centers | Paris and the Institute for Ideas and Imagination.

Colm Tóibín is an Irish novelist, essayist, playwright, and poet. He is currently the Irene and Sidney B. Silverman Professor of the Humanities at Columbia University. He has been short-listed 3 times for the Booker Prize and has won the Los Angeles Times Novel of the Year, the Costa Novel of the Year, the Stonewall Book Award, the Lambda Literary Award, and the Irish PEN Award for his contribution to Irish literature. He is a member of the American Academy of Arts and Letters and the American Academy of Arts and Sciences, and is a vice president of the Royal Society of Literature.