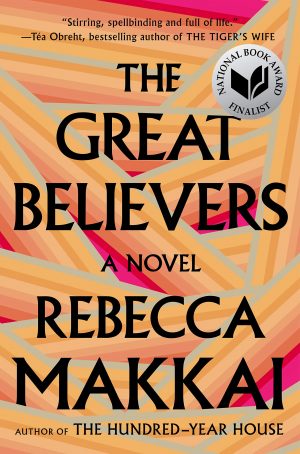 Please join us for an evening with Rebecca Makkai, who will be speaking with Daniel Levin Becker about her latest critically-acclaimed novel, The Great Believers.

Rebecca Makkai is the Chicago-based author of the story collection Music for Wartime, as well as the novels The Hundred-Year House (a BookPage “Best Book” of 2014 and winner of the Chicago Writers Association Award) and The Borrower (a Booklist Top Ten Debut). Her short fiction had appeared in The Best American Short Stories anthology in 2008, 2009, 2010 and 2011, and appears regularly in publications such as Harper’s, Tin House and Ploughshares, and on public radio’s This American Life and Selected Shorts. The recipient of a 2014 NEA Fellowship, Rebecca has taught at the Tin House Writers’ Conference, Northwestern University and the Iowa Writers’ Workshop.

The Great Believers, published by Viking in June 2018, was a Finalist for the Pulitzer Prize. It won the Carnegie Medal for Excellence for Fiction 2019 and the LA Times Book Prize for Fiction, and was a finalist for the National Book Award for Fiction 2018, the Midwest Booksellers Choice Award, and the 2019 Stonewall Barbara Gittings Literature Award. The Great Believers Film rights are under option. It was selected as one of the Top Five Best Novels of the Year by the New York Times, and the Best Novel of the Year by NPR (National Public Radio). Television series rights have been optioned by Paper Kite/Amy Poehler. She has been longlisted for the Simpson/Joyce Carol Oates Literary Prize honoring a mid-career writer.

Daniel Levin Becker is senior editor at McSweeney’s Books, a contributing editor to The Believer, and the youngest member of the Oulipo. He is the author of Many Subtle Channels: In Praise of Potential Literature (Harvard University Press, 2012) and the translator of, among others, Georges Perec’s La Boutique Obscure (Melville House, 2013) and Frédéric Forte’s Minute-Operas (Burning Deck, 2015). He lives in Paris.