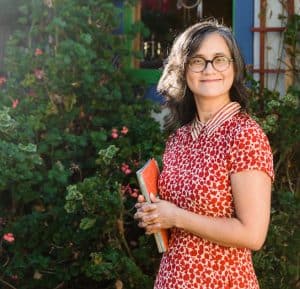 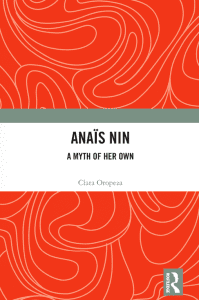 Please join us for an evening with Clara Oropeza, author of Anaïs Nin: A Myth of Her Own, which traces Nin’s literary craft by following the intimacy of self-exploration and poetic expression attained in the details of the quotidian, transfigured into fiction. By digging into the mythic tropes that permeate both her literary diaries and fiction, this book demonstrates that Nin constructed a mythic method of her own, revealing the extensive possibilities of an opulent feminine psyche.

In this work, Clara demonstrates that the literary diary, for Nin, is a genre that with its traces of trickster archetype, among others, reveals a mercurial, yet particular understanding of an embodied and at times mystical experience of a writer. The cogent analysis of Nin’s fiction alongside the posthumously published unexpurgated diaries, within the backdrop of emerging psychological theories, further illuminates Nin’s contributions as an experimental and important modernist writer whose daring and poetic voice has not been fully appreciated. By extending research on diary writing and anchoring Nin’s literary style within modernist traditions, this book contributes to the redefinition of what literary modernism was comprised, who participated and how it was defined.

Dr. Clara Oropeza is a Latina writer and Professor of English Literature at Santa Barbara City College, California. Clara’s research combines comparative mythology, feminist and literary studies and cultural theory. She has contributed various essays to Sagewoman and Between. Clara earned a Ph.D. in Comparative Mythology and Literature from Pacifica Graduate Institute and an MA in English Literature from California State University, Los Angeles.