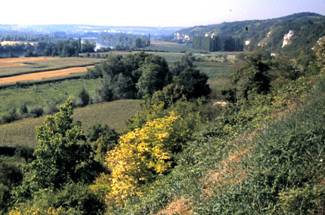 Pissarro’s Places covers many of the cities, villages, and rural areas where Camille Pissarro painted. But one chapter had to be cut –one with a unique American twist–and no one but you will know the story of Pissarro in La Roche-Guyon.

What drew artists to La Roche-Guyon becomes obvious on the approach to the village. Coming down the hillside in a series of sharp S-curves, we see a gorgeous panorama of the Seine gently twisting through its fertile valley.

Camille Pissarro first visited La Roche-Guyon in 1857 and returned in the summers of 1858, 1859, and 1865, when he painted the Square in La Roche-Guyon. Much of the appeal of this painting lies in the patterns made by the lofty gables and brown rooftops, perfectly outlined by thick impasto (layers of paint). Paintings to be shown at the French salon were required to have smooth finishes with no visible brush marks. The thick impasto in this painting shows Pissarro’s early rebellion against the art establishment. 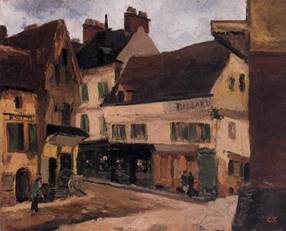 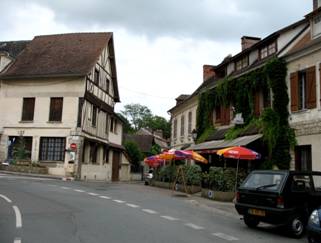 Long ago, the inhabitants of La Roche-Guyon dug a cave fortress high in the chalk cliffs overlooking a large curve in the Seine. It was described in the mid 1100s as “invisible on its surface, it is dug in a high rock…a full residence equipped with rare and miserable openings.” In the late 12th century, feudal lords constructed a stone tower (donjon) and linked it to the cliff-castle by an underground tunnel through the rock. The original chateau, built in 1250, nestled up to the white chalk cliffs under the donjon. 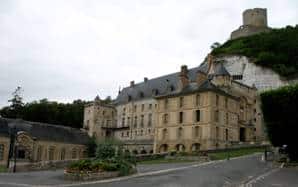 In the 17th century, the chateau came into the La Rochefoucauld family, and the right wing and stables were added in the 18th century. The duke, Louis Alexandre of Rochefoucauld d’Enville, befriended Benjamin Franklin and John Adams who came to France seeking help during the American Revolution. While Thomas Jefferson was in France, he also was a frequent guest at La Roche-Guyon. He brought back cuttings of trees and plants for his home at Monticello. 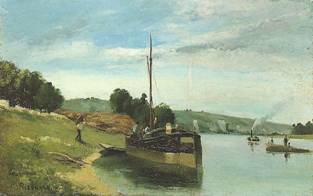 Barges on the Seine is one of the loveliest of Pissarro’s early paintings. The focal point is a cargo boat moored at a bend of the Seine. Your eye skims the foreshortened length of the boat and curves around the distant hills with their glittering white cliffs. A raft (perhaps a ferry) floats near the middle of the river as a steamboat makes its way upriver, providing a modern contrast to the old-fashioned raft. 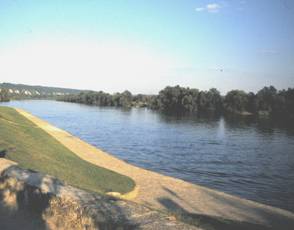 Banks of the Seine at La Roche-Guyon today

The topography is strikingly similar to the river bank at La Roche-Guyon. The white cliffs upriver and the curve of the river to the right are exactly as Pissarro painted them. If you go to La Roche-Guyon, be prepared for busloads of tourists. The quiet little village I visited for 20 years has now become a new destination because the historic chateau has now been opened to the public.

Saul will present her book Pissarro’s Places at the Library on May 22.