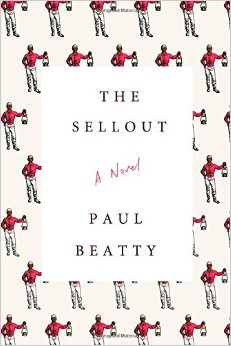 Here’s a list of hot new books that have recently been or will soon be entered into the Library collections. Come check them out and see what the buzz is about!

The Sellout, by Paul Beatty
A novel satirizing American race relations and leaving nothing sacred.
“The first 100 pages… are the most caustic and the most badass first 100 pages of an American novel I’ve read in at least a decade. I gave up underlining the killer bits because my arm began to hurt.” Dwight Garner, The New York Times

There is Simply Too Much to Think About, by Saul Bellow
A new collection of essays, interviews, and speeches by the award-winning author of The Adventures of Augie March and Herzog.“In these essays Bellow grapples with ideas more often than characters. He stretches out and explores questions about the past and future of literature, the moral and aesthetic dimensions of art, the problem of experience, and the temptation of politics.” Michael O’Donnell, The Wall Street Journal

In the Unlikely Event, by Judy Blume
Judy Blume’s first book for adults brings us the story of a 15-year-old girl growing up in New Jersey in the 1950s and examines the various reactions of those in her community to a succession of plane crashes nearby.
“Blume is back – and with an extremely unusual and utterly brilliant novel. Never mind what she has done before: it feels as if this is the book she has been waiting her whole life to write. And it is, quite simply, extraordinary. It veers ambitiously between myriad viewpoints, with two or three pages apiece devoted to little windows into the characters’ lives.” Viv Groskop, The Guardian

The Fifth Gospel, by Ian Caldwell
From the author of The Rule of Four, this thriller set in the Vatican makes use of theology and history to delve into the mysteries of Christianity.
“In homage to the Christian message, sin and salvation, forgiveness and redemption, love and sacrifice are chronicled from the personal to the universal. A brilliant work.” Kirkus Reviews

Finders Keepers, by Stephen King
This sequel to Mr. Mercedes deals with a famous deceased author, an overzealous fan, and a boy who finds himself in possession of important stolen papers.
“Most of the characters in this novel have their vision clouded one way or another, a mistake that can be costly. Stephen King sometimes writes complicated books about simple things (cars, baseball); here he writes a simple book about complicated ideas. And if, at first, you think Finders Keepers is meat-and-potatoes King, just wait: The dessert is really satisfying.” Bethanne Patrick, NPR

Satin Island, by Tom McCarthy
A satire on the human search for meaning.
“Through an accumulation of piercing observations, idle ruminations, and a dense system of symbols, Satin Island crystallizes into a magisterial ethnographic portrait of our overstimulated, interconnected, simulacra-addicted times.” Marc Mewshaw, The Atlantic

Once Upon a Time in Russia, by Ben Mezrich
From the author of The Accidental Billionaires, this work follows two Russian oligarchs in the time of Boris Yeltsin and Vladimir Putin.
“This is lowbrow journalism at its best: recreated dialogue, the author’s insight into everyone’s thoughts, characters and actions tweaked to protect sources and maintain a fiercely cinematic pace. Nevertheless, the bizarre events described in the book happened more or less as described, and between the action sequences, Mezrich, almost as if by accident, reveals the sad story of how Russian resources and infrastructure were looted by the fortunate few.” Publisher’s Weekly

Voices in the Night, by Steve Millhauser
A collection of stories about mysterious happenings from the Pulitzer Prize-winning author.
“The towns in Steven Millhauser’s stories are haunted. The characters — nearly all of them — are frenzied. They see phantoms, they fixate on surreal happenings, they hear voices in the night. But Millhauser isn’t a horror writer; his latest collection elegantly toes the line between the real and the surreal, and many of the stories examine how we attempt to collectively explain the unexplainable.” Maddie Krum, The Huffington Post

God Help the Child, by Toni Morrison
Toni Morrison’s new novel, her first set in the present day, tells the story of a beautiful and powerful black woman, Bride, as she deals with memories of her childhood and comes into contact with a white girl named Rain who has mysteries of her own.
“[…T]here is that magnificence, burning beneath the surface of every word. The language, shifts in point of view and the audacity of the novel’s premise are overwhelming. Morrison remains an incredibly powerful writer who commands attention no matter the story she is telling. In God Help the Child we have a coming-of-age story for an adult woman in arrested development.” Roxane Gay, The Guardian

On the Move, by Oliver Sacks
Acclaimed author and neurologist Oliver Sacks turns his attention inward in this memoir that continues his life story from the point where his first memoir, Uncle Tungsten, left off.
“The fascination of Sacks writing about his own life is to discover what contributed to his affinity for those who are constituted eccentrically…. In this genial and often humorously narrated life, he is very much alive and full of passionate energy, as well as of and wry self-awareness.” Lisa Appignanesi, The Guardian

Early Warning, by Jane Smiley
The sequel to Some Luck and the second in the Last Hundred Years trilogy, this novel follows the expansive Langdon family through the latter half of the nineteenth century in America.
“[W]hat Smiley feels most like here, for her faultless skill in bringing a wide cast so vividly into being that we would know them anywhere, for the remarkable intensity of her feeling for territory and landscape and her combination of impatient intellect, emotional perspicacity and unfailing humanity, is America’s Tolstoy. The satisfactions of the first two volumes of this trilogy have been so complex and nourishing that the comparison seems justified, and the third instalment can’t come soon enough.” Christobel Kent, The Guardian

My Generation, by William Styron
A collection of nonfiction selections by the author of Sophie’s Choice, broad in time period and in type.
“A rich collection by an estimable writer…. Wide-ranging, lucid, and incisive.” Kirkus Reviews