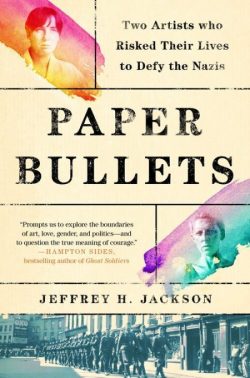 on Paper Bullets: Two Artists Who Risked Their Lives to Defy the Nazis

Paper Bullets is the first book to tell the true story of an anti-Nazi resistance campaign undertaken by an unlikely pair. Two French women –– Lucy Schwob and Suzanne Malherbe (better known today by their artistic names Claude Cahun and Marcel Moore) –– drew on their skills as Parisian avant-garde artists to write and distribute hundreds of notes, songs, poems, and drawings designed to demoralize German troops occupying their adopted home of Jersey in the Channel Islands. To do so, they assumed the identity of a Nazi soldier, calling themselves “The Soldier With No Name.”

As the war continued, they escalated their actions, often putting themselves at great personal risk all the while pretending to be one of the enemy. Lucy and Suzanne were in danger because of who they were: lesbian partners known for cross-dressing and their gender-bending photography back in Paris, Lucy’s Jewish heritage, and their communist affiliations. Jackson’s story takes readers inside the day-to-day struggles of civilians surviving in occupied territory and facing tough, sometimes gut-wrenching, choices. 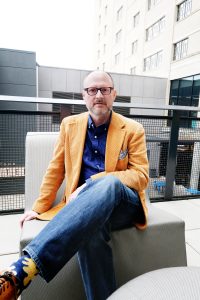 Jeffrey H. Jackson is Professor of History at Rhodes College in Memphis, Tennessee. His most recent book, Paper Bullets, was longlisted for the 2021 Andrew Carnegie Medal for Excellence in Nonfiction and selected as an Editor’s Choice “Best of the Best” for 2020 by the American Library Association’s publication Booklist. He is also the author of Paris Under Water: How the City of Light Survived the Great Flood of 1910 and Making Jazz French: Music and Modern Life in Interwar Paris, both of which have been received with high acclaim.