This event is now full, thank you for your understanding. A recording will be released in our Podcast series, “Evenings with an Author.”

*Covid-19 Update: Although our physical space has temporarily closed, the Library will continue with its Evening with an Author programming during the period of confinement. Our events will continue to be free and open to the public, via Zoom. We have moved the events up, to begin at 17h00 (Central European Time). Please check eLibris or our programs calendar for updates and line-up. 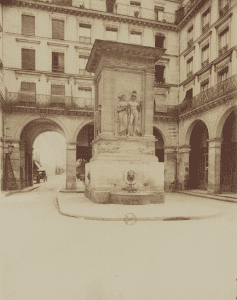 Emilio Williams presents
“Empty Streets, Busy Lives:
A surprising historical tour of le Septième through the iconic photos of Eugène Atget (1857–1927)”
A century ago, ex-pat American photographers Man Ray and Berenice Abbott discovered a treasure trove of photos that an unknown commercial photographer, Eugène Atget, had taken of the empty streets of Old Paris. The surrealists became enthralled by his uncanny and eerie images, now regarded as the foundational masterpieces of street photography. During his research on the history of 7th arrondissement, Emilio found an album of forgotten photos of the district taken by Atget. For his lecture, Emilio has combined those rarely seen photos with surprising discoveries of the colorful figures who lived in the neighborhood and walked the streets around the American Library in Paris.
Emilio Williams divides his time between Paris and Chicago, where he is a playwright resident and faculty member at Chicago Dramatists. This fall he will be teaching at Columbia College, Dominican University, and Georgia State University. He is currently working on a non-fiction book about the forgotten stories of the 7th arrondissement in the Parisian Left Bank. His award-winning theater plays have been produced and published internationally to much critical acclaim. In his previous life as a journalist, he worked for CNN in Atlanta and Washington DC.
Photo: “Fontaine de Mars” Eugène Atget, 1903.
+ Google Calendar+ iCal Export