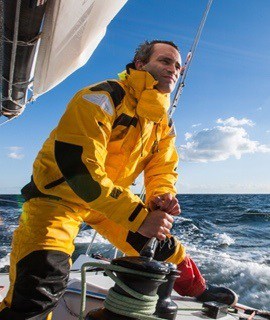 The Library is pleased to partner with the MIT Club de France to feature a special presentation on “Solitary Offshore Racing with Fabrice Amedeo: From the Sporting and Technological Challenge to Discovering Oneself.”

Fabrice Amedeo, author, journalist and sailor of Vendée Globe from Segré, Maine-et-Loire, is as passionate about his office job as he is about offshore racing. He has decided to not choose between his job and his passion for sailing. A graduate in Philosophy and Sciences-Po, Fabrice is a journalist, co-directed two documentaries for television, and has written eight books since 2005, including five on the world of ocean and ocean racing. On the high seas, Fabrice discovered the sea from the age of three and, as a teenager, came the time of the first regattas and first convoys including a first transatlantic race.

Since 2008, he has cross the Atlantic seven times and took the reins of the Vendée Globe in 2016, round the world solo non-stop and without assistance, something he called “his personal Everest.” After a little less than 104 days of loneliness, he returned in 11th position, with a fierce desire to return. He buys a foil of the very last generation for the Vendée Globe 2020, entrepreneurial this time, and thus set the course for a new chapter in its history with the offshore with, in the introduction, a 2018 Rum race that marked the minds.