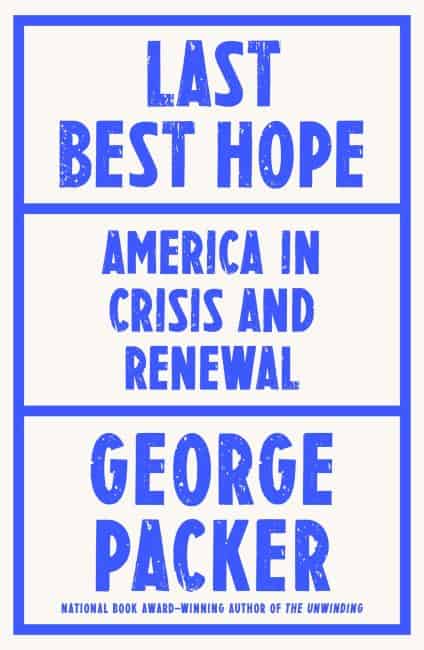 Join Evenings with an Author (in person and online*) to discuss

If there is one thing many Americans can agree on, it is that something is wrong in present-day America. The premise of journalist George Packer’s new book, Last Best Hope, is that democracy, the “art of self-government,” which struck Alexis de Tocqueville nearly two hundred years ago when he visited the U.S., is in trouble.

Observing the series of events which struck America in 2020 (the pandemic and its mismanagement, the racial reckoning, the election and its aftermath), Packer seeks to propose a diagnosis. The problem, he argues, is epistemological: America has divided itself into four groups which offer four different narratives of American identity, and which view each other group as the enemy. The achievement of Packer’s work is his ability to look critically at both the Right and the Left, while refusing to pardon or wholly blame any side. Adopting a truly democratic stance, Packer stresses that no American is exempt from responsibility for what the country has become, and that all Americans are called to collaborate on what it can be.

George Packer is a journalist and author. He writes for The Atlantic and previously served as staff writer for The New Yorker. Packer is the author of The Assassin’s Gate (2005), a finalist for the 2006 Pulitzer Prize; The Unwinding (2013), awarded the National Book Award for Nonfiction; and Our Man: Richard Holbrooke and the End of the American Century (2019), which received the Los Angeles Times Book Prize and was a finalist for the 2019 Pulitzer Prize.

Thomas Chatterton Williams is the author of Losing My Cool and Self-Portrait in Black and White. He is a contributing writer at the New York Times Magazine, a 2019 New America Fellow and a visiting fellow at AEI. His work has appeared in the New Yorker, the London Review of Books, Le Monde, and has been collected in The Best American Essays and The Best American Travel Writing. He has received support from Yaddo, MacDowell and The American Academy in Berlin, where he is a member of the Board of Trustees. His next book, Nothing Was the Same: The Pandemic Summer of George Floyd and the Shift in Western Consciousness, will be published by Knopf.

*The discussion will be available both online and in person. While the conversation will happen in person (Packer and Chatterton Williams will appear in the Reading Room), the Library will stream the conversation on Zoom for a live viewing experience. Both in-person and online attendees will be able to pose questions.