Evenings with an Author: Nicolas Le Goff, Another Paris: 10 Walks in the Districts that are Transforming the East of Paris 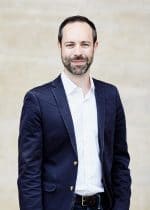 Another Paris: 10 Walks in the Districts that are Transforming the East of Paris– Industrial Wastelands, Contemporary Architecture, Shared Gardens, Street Art, Coffee Shops…the east of Paris is undergoing a major metamorphosis. By offering itineraries beginning where tourists generally stop, these ten walks invite urban explorers to take side steps and widen their horizons. Venture forth to discover the districts where the heart of the city is now pulsing.

Graduate of Sciences Po Rennes and La Sorbonne, Nicolas Le Goff worked for 10 years on the promotion of the french cultural industries abroad, within the framework of Business France. He was then recruited by the Paris Town Hall to be in charge of innovation in the cultural and digital fields for three years, which led him to join Le Centquatre as a special adviser of the director, José-Manuel Gonçalvès. In this capacity, he ran the international relations of the center and coordinated urban renovation and cultural consulting projects with which Le Centquatre was involved. Two years ago, he decided to become a « Passeur urbain » (urban scout), and now writes alternative guides on the innovative districts of Paris and the Greater Paris Region, and is an independent consultant on how arts and innovation contribute to the attractiveness of cities.