Evenings With an Author: Nadja Sayej 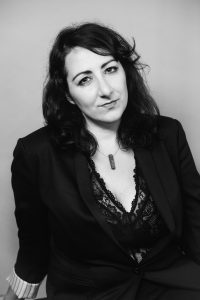 Nadja Sayej has been interviewing and photographing celebrities over the past 10 years. From Yoko Ono to James Franco and Cate Blanchett, her latest title, Celebrity Photographs: A Behind the Scenes Look at the Rich and Famous, tells the story behind 50 behind-the-scenes photos she has taken of stars, from Marina Abramovic to Emma Stone and Karl Lagerfeld.

Nadja Sayej is a culture journalist covering entertainment, film, TV, contemporary art, music and comedy. She writes for The New York Times, The Guardian, The Economist, Harper’s Bazaar, W Magazine, Condé Nast Traveler, Architectural Digest and CNN Style, among others. With a focus on celebrity interviews, she has interviewed hundreds of world-renowned film directors, artists and celebrities including David Lynch, Marina Abramovic, Susan Sarandon, Isabella Rossellini, John Waters, Patti Smith, Salma Hayek and Jean Paul Gaultier. She made headlines for conducting the first-ever jpeg interview with Douglas Coupland. Nadja has published four books, including The Celebrity Interview Book, which includes her 21 best Q&As, and Biennale Bitch, a comedy book about covering biennales across the globe.

Evenings with Authors and other weeknight programs at the Library are free and open to the public (except as noted) thanks to support from the Annenberg Foundation, our members, and those who attend programs. There is a suggested donation of ten euros for non-members. Doors open at 19h00.