Evenings with an Author: Amit Chaudhuri 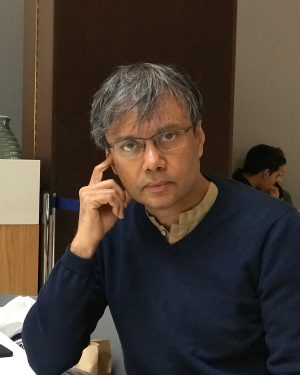 Please join us for an evening with Amit Chaudhuri, as he speaks about his latest novel, Friend of My Youth, a work that addresses friendship, displacement, and the limitations of memory and the written word to capture and communicate lived experience. Set in Mumbai, the book explores the narrator’s visit to the landscape of his youth and details encounters–both personal and historical–that play out in that city, at once familiar and alien to him in the wake of the 2008 terror attacks.

Amit Chaudhuri is the author of seven novels, the latest of which is Friend of My Youth. He is also an essayist, poet, musician, and composer. He is a Fellow of the Royal Society of Literature. Awards for his fiction include the Commonwealth Writers Prize, the Los Angeles Times Book Prize for Fiction, and the Indian government’s Sahitya Akademi Award. In 2013, he was awarded the first Infosys Prize in the Humanities from a jury including Amartya Sen, Homi Bhabha, Akeel Bilgrami, and Sheldon Pollock for outstanding contribution to literary studies. In 2017, the government of West Bengal awarded him the Sangeet Samman for his contribution to Indian classical music. He is Professor of Contemporary Literature at the University of East Anglia, and, this year, is University College London’s Annual Visiting Fellow. He is a fellow at the Columbia Institute of Ideas and Imagination.

Friend of My Youth will be available for purchase after the event, thanks to The Red Wheelbarrow Bookstore.

Evenings with Authors and other weeknight programs at the Library are free and open to the public (except as noted) thanks to support from the Annenberg Foundation, our members, and those who attend programs. There is a suggested donation of ten euros for non-members. Doors open at 19h00.