Feminism à la française: a panel discussion on what defines the movement in France and America 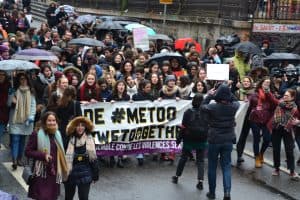 Join us for a lively discussion moderated by New Yorker writer Lauren Collins on French and American feminism with panelists Rokhaya Diallo, Alice Pfeiffer, and Lindsey Tramuta. In a wide-ranging conversation, they will touch on the impact of contemporary political trends on women’s issues, the intricacies and demands of intersectionality, and the differences between the #MeToo and #BalanceTonPorc movements.

Lauren Collins began contributing to The New Yorker in 2003 and became a staff writer in 2008. She is the author of When in French: Love in a Second Language, which the Times named as one of its 100 Notable Books of 2016. She is working on a second book, about a coup d’état perpetrated by white supremacists in Wilmington, North Carolina, in 1898, and its effects on the city during the past hundred and twenty years.

Rokhaya is a French journalist, author, filmmaker, and activist for racial and gender equality. She is a pundit and a TV host, has published several books and has directed several award-winning documentaries including the award winning Steps to Liberty and Networks of Hate.

Alice has an MA in Gender Studies from the London School of Economics, and has written for The New York Times, Le Monde, The Guardian and Vogue. She currently runs the fashion pages of Les Inrocks, and has a book coming out in the Fall about the myth of the Frenchwoman.

Lindsey is the author of the bestselling book The New Paris and a regular contributor to the New York Times, Condé Nast Traveler, Afar and Fortune Magazine. Her next book, which will be released by Abrams in April 2020, will look at the women shaping Paris.